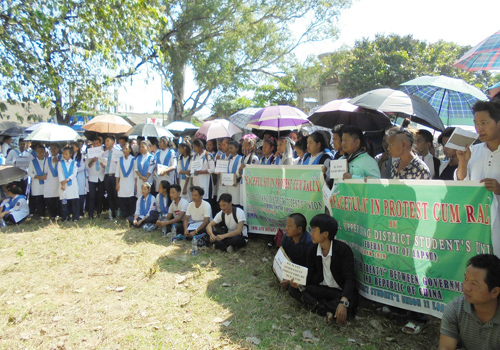 PASIGHAT, Oct 24: Several hundred members of student unions from East Siang, Siang and Upper Siang districts assembled here in East Siang district on Wednesday and staged a protest, demanding a water treaty with China.
The student leaders said China has “hatched a conspiracy against India, thereby creating a terror in the frontier state and downstream Assam through man-made disasters from time to time”.
The protesters registered their grievances against China’s “bullying” and the Central government’s apathy towards the issue with slogans on saving the Siang River and Arunachal, whilst also voicing their demands for a water treaty.
Addressing the rally, AAPSU general secretary Tobom Dai rued that China has been using Siang waters according to its whims, but there has been no reaction from the Government of India.
He alleged that the neighbouring country is exploiting the water resources, contaminating Siang waters and even blocked it to create terror in the Siang region and downstream Assam, but the Central Water Commission has not initiated any step to save Siang River.
“Unusual phenomenon, such as change of water quality in Siang and constant flood threat since last one and half year has been creating panic among the people living on both banks. Chinese hand behind the unusual phenomenon and frequent calamity alert on the Siang River cannot be ruled out,” Dai added.
Also addressing the gathering, youth leader Mongol Yomso said the union government should realize that China has no right to exploit the natural water to show their imperious power over India.
The protesters later submitted a memorandum to Union Home Minister Rajnath Singh through the East Siang deputy commissioner demanding well-defined ‘Water Treaty’ with China and to formulate rigid water policy in order to protect Siang waters, along with the Siang valley civilization.