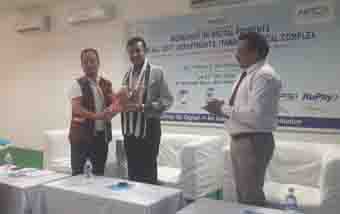 ITANAGAR, Oct 25: The Itanagar Smart City Development Corporation Limited in collaboration with the National Payments Corporation of India conducted a two-day workshop on digital payments for merchants, vendors and government departments of Itanagar smart city on 24 and 25 October at the banquet hall here.
The workshop was conducted as part of the ‘100 day challenge in 100 smart cities’ undertaken by the union housing & urban affairs ministry to create awareness among merchants, vendors and government departments in adopting digital modes of payment.
Subsequent to the challenge, the municipal corporations in the smart cities will be conferred with the Smart Cities Digital Payments Awards 2018.
The challenge began on 1 July and will conclude on 30 October.
Itanagar is among the two smart cities from Northeast India to have qualified the first stage.
Addressing the gathering of merchants and vendors on the first day of the programme, PLO to CM Nera Techi emphasized on “adopting smart ways to handle their finances as they are major contributors to Itanagar smart city.”
The event saw the participation of members of the market welfare associations of Itanagar, Naharlagun, Nirjuli and Banderdewa, and the All Arunachal Pradesh Hawkers and Street Vendors Federation.
The second day of the workshop, for government departments, was inaugurated by Capital Complex Deputy Commissioner Prince Dhawan, who is also the CEO of the smart city.
“Digital payment is a crucial enabler for smart cities and could provide significant benefits to citizens, businesses, and state governments,” Dhawan said.
He stressed on all the government departments enabling “digital payments acceptance infrastructure at every physical point of contact with citizens, especially the revenue collecting departments.”
Digital payment is a way of payment in which both payer and payee use digital modes to send and receive money. It does not include cash, cheque, or any other paper-based payment instrument.
Multiple channels of digital mode of transactions include point of sale (PoS), credit cards, debit cards, RTGS, NEFT, IMPS, BHIM, BHIMQR, BHIM Aadhaar, mobile wallets, Bharat bill payment system, etc. (DIPRO)