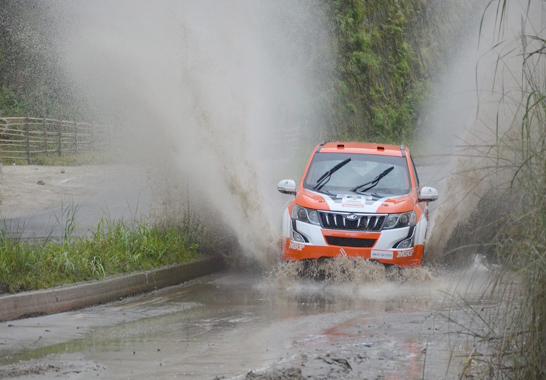 ITANAGAR, Nov 3: Three-time APRC champion Gaurav Gill recovered from a tyre puncture and only his second-stage defeat this season to surge into the lead on Day One of the Rally of Arunachal – Round 3 of the MRF FMSCI Indian National Rally Championship (INRC) 2018 – here on Saturday.
Team Mahindra Adventure’s Gill, with Musa Sherif by his side, won the other three stages in his usual aggressive style to set himself up for another victory in this elite championship. He raced at speeds over 180 km/hr, recording a scorching average speed of 115.55 km/hr in the opening stage.
He was at his slowest in the second stage, managing an average of 99.92 km/hr, which was still good enough to give him the second position in that stretch.
Gill’s Mahindra Adventure teammate Amittrajit Ghosh (with Ashwin Naik) notched up the honour of beating Gill, winning Stage 2 in style. He had, however, suffered a setback in Stage 1 himself, struggling with a power issue to finish 9th.
He made up in the remaining rounds to climb to the third position by the end of an exciting day, although his car is still not firing on all cylinders.
Snap Racing’s Phalguna Urs (Srikanth) grabbed the second position with one second- and two third-place stage finishes. They, however, slipped to fifth place in the fourth and final stage of the day, to be trailing Gill and Sherif by 1 minute and 31.8 seconds.
Their fine show was good enough to give them the lead in the INRC 2 category, ahead of top contenders Rahul Kanthraj (Vivek Y Bhatt) and Karna Kadur (PVS Murthy).
In the INRC 3 category, Suhem Kabeer (Jeevarathinam) made the most of championship leader Aroor Vikram Rao’s (Somayya AG) bad luck in Stage 4 to streak ahead into the lead. Suhem, however, was in his element, winning two of the stages in his category.
Five-time INRC champion Gill was pleased with his driving, despite the puncture.
“The first stage went off very well. We, however, hit a stone in Stage 2 and picked up a puncture,” he pointed out. “We still managed to finish in decent time, which helped us stay in the lead,” he added.
Gill explained that the final day might be tricky as the track was likely to be muddy, following rains, while they only had tyres suited for tarmac. “It won’t be easy but we will give it our best shot,” he declared.
Amittrajit also was not too unhappy with the way the day panned out.
“Our car had power issues during Stage 1 and we fell back to the ninth place. By the end of the day, we have climbed to third. Our goal now is to focus on the second position. First is not within reach as we are quite far behind in terms of speed,” he said.
Results
INRC overall
1. Gaurav Gill/Musa Sherif (Team Mahindra Adventure; 00:31:22.9); 2. Phalguna Urs/Srikanth (Snap Racing; 00:32:54.7); 3. Amittrajit Ghosh/Ashwin Naik (Team Mahindra Adventure; 00:33:05.1)
INRC 1
1. Gaurav Gill/Musa Sherif (Team Mahindra Adventure; 00:31:22.9); 2. Amittrajit Ghosh/Ashwin Naik (Team Mahindra Adventure; 00:33:05.1); 3. Lokesh Gowda/Venu Ramesh Kumar (Team Champions; 00:37:30.4)
INRC 2
1. Phalguna Urs/Srikanth (Snap Racing; 00:32:54.7); 2. Rahul Kanthraj/Vivek Y Bhatt (Arka Motorsports; 00:33:20.9); 3. Karna Kadur/PVS Murthy (Arka Motorsports; 00:33:52.7)
INRC 3
1. Suhem Kabeer/Jeevarathinam (Team Champions; 00:33:17.8); 2. Dean Mascarnehas/Shruptha Padival (Team Champions; 00:33:23.2);
FMSCI 2WD Cup
1. Adith KC/Arjun SSB (00:34:18.6)