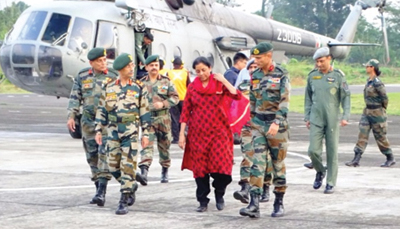 ITANAGAR, Nov 6: Defence Minister Nirmala Sitharaman, who arrived in Chabua in Assam on Tuesday, will visit forward army posts in Arunachal Pradesh and celebrate Diwali with the troops deployed along the Line of Actual Control (LAC) with China.
Sitharaman was received at Chabua by the army’s Eastern Command General Officer Commanding-in-Chief, Lt Gen MM Naravane, and Spear Corps General Officer Commanding (GOC), Lt Gen Gopal R, Kohima-based Defence PRO Col C Konwer informed in a release.
Thereafter, Sitharaman proceeded to Dinjan, where she was briefed on the security situation in Upper Assam and the operational preparedness along the LAC with China by the Dao Division GOC.
The minister complimented the efforts of the Dao Division in maintaining the sanctity along the LAC, and commended the armed forces for their
utmost dedication in the line of duty.
At Dinjan, she also interacted with ‘veer naris’ and ex-servicemen, and distributed sweets on the occasion of Diwali.
The defence minister is scheduled to visit forward army posts in Arunachal Pradesh on 7 November, the release said.