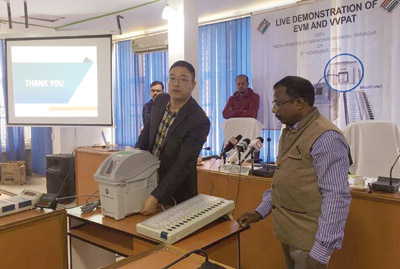 Staff Reporter
ITANAGAR, Nov 6: The chief electoral commissioner’s office organised an ‘awareness and live demonstration programme’ on electronic voting machines (EVM) and the Voter Verifiable Paper Audit Trail (VVPAT) for media persons at Nirvachan Bhavan here on Tuesday.
Chief Electoral Officer Kaling Tayeng said the programme was required as the general election is due in 2019 and
the media persons would be playing an important role in providing right information to the public.
He said the election commission is ready and in possession of all election machinery, equipment and materials.
EVM nodal officer Lijum Ete made a PowerPoint presentation on EVMs and the VVPAT. He also clarified on misinformation and allegations with regard to the reliability of the machines.
“Not only do the EVMs reduce time, energy and money, they also ensure fair elections as they are not connected to any network or radio signal,” Ete said.
The VVPAT, he said, allows the voters to verify that their votes have been cast as intended. He clarified that once a vote is cast it cannot be withdrawn if the voter later claims to have pressed on the wrong candidate.
“The VVPAT removes the apprehension that the machine has been tampered with, and the paper trail also helps in maintaining accountability later,” Ete informed.
Arunachal will use M2 EVMs, in which four balloting units can be cascaded together to accommodate 64 candidates (including NOTA) at one go.
With Braille symbols added to the EVMs, they will also help visually impaired citizens in casting their votes.
Ete encouraged the media persons present to try the machine and have their doubts clarified.
Deputy CEO Liken Koyu also spoke. (With DIPR input)