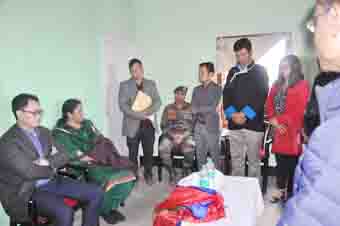 BOMDILA, Nov 8: Defence Minister Nirmala Sitharaman, along with MoS for Home Kiren Rijiju, the army’s Eastern Command General Officer Commanding-in-Chief Lt Gen MM Naravane, and other army officers arrived here on Wednesday to take stock of the situation arising out of the recent clash between the civil administration and the 2nd Arunachal Scouts battalion.
The defence minister interacted with the local legislator and civil society representatives of all the six tribes of the district, each of whom ventilated their grievances.
The DC and the SP of West Kameng district, and the commanding officer of the 2nd Arunachal Scouts also presented their versions of the incident that took place on 3 November at the police station here.
Sitharaman also visited the police station to see the extent of the damages caused, and heard out the women police officials and the OC who were on duty on 2 November.
The defence minister encouraged all the officers to keep their morale high while rendering services to the nation.
Rijiju condemned the unfortunate incident and called for better understanding and cooperation between the armed forces and the civil administration.
Earlier, the defence minister visited the forward areas in Dau-Delai and Lohit valley. She first over-flew the forward-most post of Rochcham, near the India-China border, and thereafter visited Hayuliang.
At the forward post, she celebrated Diwali with the troops, and commended the zeal and dedication of the troops who are stationed in these high mountainous areas.
The minister was accompanied by Lt Gen Naravane and Spear Corps GOC Lt Gen Gopal R. (DIPRO with input from Defence PRO)