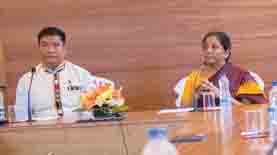 ITANAGAR, Nov 11: Defence Minister Nirmala Sitharaman said on Sunday that the Sino-India relation has improved.
The defence minister was giving a talk on the topic ‘Towards bridging the Indo-China relationship for an emerging Asia’ as part of the 7th Late Rutum Kamgo Memorial Lecture, organized by the Arunachal Pradesh Charitable Trust (APCT) at the Dorjee Khandu convention centre here.
Sitharaman described India and China as “key players who are on the centre-stage of all global developments and issues.”
Stating that the relation between the two countries has a direct impact on everything global, she said Prime Minister Narendra Modi was making efforts to improve and sustain a friendly relationship with China, “and the situation has improved.”
“Today we both cannot deny each other’s significance and dominance, especially in Asia and Southeast Asia. The need of the hour is to cooperate with each other, resolve all issues through dialogue, and progress together as, because of us both, the 21st century is regarded as the Age of Asia,” the defence minister said.
She said a mechanism is being put in place through dialogues and meetings at the highest levels to resolve all issues, and advocated trust and confidence-building measures at all levels.
Sitharaman also delved into a few key fields in which both the countries could cooperate and help each other, besides in trade.
“We need to compete, but it should never end up in conflict,” she said.
Pema in his address said the people of Arunachal Pradesh “have high expectations from the leaders of both the countries – especially Prime Minister Narendra Modi – in improving and strengthening the Sino-India relationship.”
“For the prosperity of Arunachal Pradesh and Northeast India, and for the Act East policy to succeed, the region has to be look at through the lens of trade, too,” he said. “If there can be trade through Nathu La pass in Sikkim, and in Uttarakhand through the Lipukekh pass, why not build the Ledo road?”
He said the Ledo road, or the Stilwell Road, as it is popularly known, could become the prime mover for cross-border trade and economic integration in the region.
“If this road is operational, it will not only facilitate the movement of goods but will also help in building cultural and people-to-people ties,” the CM said.
He also advocated focusing on building relations with the ASEAN countries, saying it would benefit the entire Northeast.
Pema expressed gratitude to the central leadership for making the Act East Policy a reality, “the fruits of which are being witnessed at the grassroots level.” He also thanked the defence minister for visiting the state time and again.
The 7th Late Rutum Kamgo Memorial Lecture was attended by several ministers, legislators and officers of the state government, along with students, youths and activists.
The lecture is conducted in memory of late Rutum Kamgo, a dedicated first-generation worker of the Rashtriya Swayamsevak Sangh and the first secretary of the APCT. (CMO)