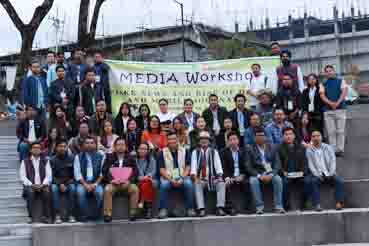 ITANAGAR, Nov 15: “The journalists of today’s era have to be the gatekeepers of the society; gatekeepers to protect it from the influence of fake and incorrect news,” said East Mojo Editor-in-Chief and co-founder of Atvi Infotainment, Karma Paljor, on Thursday.
Paljor, who was addressing a media workshop on the theme ‘Fake news and rise of digital and mobile journalism’ at the Dorjee Khandu convention centre here, said fake news had not only become a primary concern for the major countries of the world but also a big predicament for tech powerhouses like Google and Facebook.
“As journalists, we need to flag fake news and stand against it in a united way. Fake news stories are more tempting for the normal public to share, so we have to play the gatekeeping role that the legacy media houses once played,” said Paljor, who was the resource person of the workshop.
Gatekeeping as a theory is the news selection and extraction of news, which then gets passed through a series of gates (the journalists), gets transformed, and ends up in the news.
Acknowledging that the biggest factor behind the success of fake news stories is their high level of social engagement, Paljor said one of the main concerns from fake news is that they can polarize the society, especially during political events and elections.
Citing the example of the mob lynching that took place in Assam in June this year, when two youths lost their lives following the circulation of fake news on WhatsApp, Paljor said journalists, as well as the normal public, could easily identify a fake story by using common sense.
“Identifying fake news is easy most of the time as all you need is a critical mindset. Check the credibility of the source from where the news has been published or shared; verify the names/designation of the people who have been quoted in the news,” said Paljor.
Speaking on the topic, ‘Rise of digital and mobile journalism,’ Paljor, who himself is an award-winning journalist, informed that people, particularly the youths of today, are spending more time on the internet than ever before.
He said that, as per a survey conducted by social media management platform Hootsuite, the average mobile internet user in India spends almost 70 percent of their time on Facebook, WhatsApp, music and entertainment apps, and that the time spent by the people of the Northeast on Facebook is the highest in the country at 83 percent.
Sharing the practices his media house uses to promote its stories, Paljor called upon the scribes to engage with the community when they file reports.
“When you engage with the people, the people engage with you. The mobile social media penetration in India as of January 2018 is 75 percent, which means that we have a seven-hour window in which we can connect with the people,” he said.
Paljor also called upon the media houses of the state to maintain a strong but healthy competition among each other, so that its influence reaches out to the masses in a positive way.
Amar Sangno and Mukul Pathak, president of the Arunachal Pradesh Union of Working Journalists (APUWJ) and the Arunachal Electronic Media Association (AEMA), respectively, also spoke.
Besides the journalists of the state, mass communication students from Rajiv Gandhi University, members of the All Arunachal Pradesh Students’ Union and the Galo Students’ Union, and senior journalists Pradeep Kumar Behera, Taro Chatung and Utpal Boruah were also present on the occasion.
The media workshop was organized by the Arunachal Press Club, the APUWJ and the AEMA in the run-up to the National Press Day celebration on 16 November.