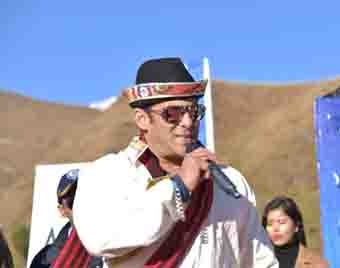 MECHUKA, Nov 22: Bollywood actor Salman Khan declared open the 6th edition of the [email protected] festival here in West Siang district on Thursday, in the presence of Chief Minister Pema Khandu, MoS for Home Kiren Rijiju, and others.
Expressing great admiration for the beauty of Arunachal, Khan promised to shoot his upcoming film in the state.
The CM in his speech thanked the actor for his contribution in promoting tourism in the state, and also for his presence at the curtain-raiser event for the second MTB Arunachal mountain bicycle race at Mumbai in September.
Pema said the strength of Arunachal lies in its diversity which offers a great many unexplored sites and cultures.
“Each place in Arunachal has its own unique beauty,” he said.
The CM informed that the state government recently signed MoUs with 17 private investors, a majority of them related to the tourism sector.
He expressed hope that, with private sector players beginning to invest heavily in the state’s tourism sector, Arunachal would witness exponential growth in the sector.
Earlier, Khan flagged in the second edition of the Dalmia MTB Arunachal mountain bicycle race, which had been flagged off by Rijiju on 14 November from Itanagar. About 100 bikers from 10 countries, including the USA, Portugal, Canada, Germany, the UK, Nepal and Bhutan, took part in the event, covering a distance of 650 kms.
Khan’s magnanimity and pro-bono contribution for promotion of Arunachal as a tourism and film destination was lauded by all present.
The actor earlier took part in a 10 km bicycle ride from Dorjeeling to Mechuka, along with the CM and the MoS. The ride culminated at the festival ground, where they were accorded a warm welcome by the locals.
During the inaugural event, the winners of the MTB bicycle race were felicitated with certificates and cash prizes by the guests.
The CM also released the 2019 calendar of [email protected]
The inaugural event was also attended by Mechuka MLA Pasang Dorjee Sona and Liromoba MLA Nyamar Karbak. (CMO)