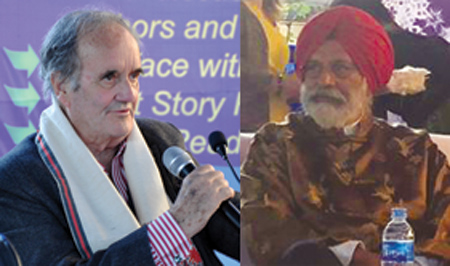 ITANAGAR, Nov 30: Acclaimed journalist and author Mark Tully said that Itanagar was just another urban centre, with uncontrolled growth lacking architectural sensibilities.
He said this while addressing the final day of the maiden three day Arunachal Literature Festival at the DK convention centre here.
Tully enthralled the inquisitive audience about his journey – BBC Bureau Chief of India for three decades to being a British writer living in India for many decades during his conversation with CCRD Executive Director Moji Riba.
Tully shared that the central theme of his books revolve around India’s oppressed and marginalized communities like the Dalits.
He outlined that through his books he wanted to say that Dalit community deserves a better life and needed to be treated equally.
He further said that pluralism and diversity of India was the hallmark of its democracy and it will remain so, which needs to be cherished. Mark said that Arunachal should be proud of its pluralism and diverse culture and should preserve it.
The renowned journalist also threw light on the current media situation of India saying it is relatively better than the situation during the Emergency.
“I don’t think the situation with the media is like the situation during the Emergency, which was straight forward censorship. However, undoubtedly there are pressures from the owners who are more interested in making money than providing genuine information” he added.
Another highlight of the day was the event featuring former chief of the Indian Army, Gen J J Singh, who was also an immensely popular governor of Arunachal Pradesh.
In his conversation with The Arunachal Times, Associate Editor, Tongam Rina, General Singh responded to wide range of topics from theKashmir issue to Armed Forces Special Powers Act and the recent incident in which the Arunachal Scouts ransacked the police station in Bomdila.
On the Bomdila incident, General Singh said that it was a small incident created by two individuals, which could have been sorted out. He viewed that the incident was unnecessarily blown out of proportion by the media.
He also shared about his autobiography-‘A Soldiers General’.
The former Governor also highlighted the developmental initiatives during his tenure in the Raj Bhavan along with the then Chief Minister, Late Dorjee Khandu that includes the four-lane highway, train connectivity and the airport. Singh further disclosed that he is coming up with a new book on India and China.
Later in the valedictory function, Singh said the maiden event should help litterateurs of the state to grow in the years to come. He was impressed by the participation of students in the event.
Terming his arrival to Itanager as a home coming, Gen Singh said that development is going on in the region. The clean, green and plastic free Arunachal should be carried forward to maintain this eco-friendly beautiful state, he said.
In his key note address noted writer Y.D. Thongchi, Sahitya Sabha Awardee and President of Arunachal Literary Society (APLS ) said that the festival was a step forward in the right direction.
He said that interest shown by the present government and the awareness campaign launched by the APLS was instrumental in bringing about this first ever festival.
Briefing about the three day long event, Special Secretary IPR, Himanshu Gupta said that enriching technical sessions on a wide range of subjects has exposed emerging literary trends in this region.
Director IPR Obang Tayeng also spoke on the day.