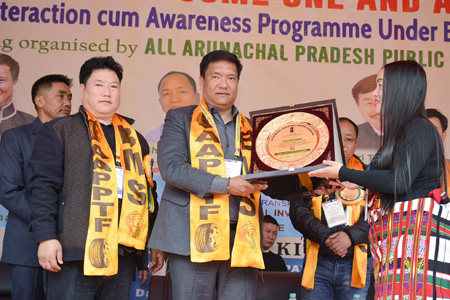 ITANAGAR, Dec 3: Chief Minister Pema Khandu attended the third interaction cum awareness programme under the Bharatiya Mazdoor Sangh (BMS) organised by the All Arunachal Pradesh Public Transport Federation (AAPPTF)hereon Monday.
Speaking at the event, the chief minister appealed to the motor transport workers to present themselves with good behaviour, honesty and hospitality to the tourists.
“The first impression visitors will get about our state is by your behaviour and conduct. If we want tourism to grow in Arunachal, we all have to act responsibly,” said Pema.
While he noted that taxi business in the capital city is yet to realize its full potential, he said that the demand for taxi services will grow with the commencement of air service and with rail service already in operation in coming days.
He, therefore, urged the transport workers to create a good reputation of the taxi business by not overcharging customers and by not harassing them.
For the welfare of the transport workers, the chief minister assured that thorough analyses and study about the operations of the workers boards in other states will be carried out to constitute a similar board in the state.
He said the AAPPTF and BMS will be made part of such study group for the creation of the board.
On demand for parking space by the AAPPTF in the state capital region, the chief minister informed that the state government has sanctioned two such projects near the Civil Secretariat and Ganga market each worth Rs 15 crore in the previous year.
If more parking projectsare required, Pema assured to have discussions with the federation on opening some in Naharlagun and other areas of the capital region.
Congratulating the AAPPTF for being affiliated with the BMS, the chief minister said mere affiliation is not enough.
“The federation members should be well aware and work in accordance with the spirit of the Mazdoor Sangh for which regular training is must for them to know more about the style and functioning of the BMS,” said Pema.
On the occasion, Itanagar MLA Techi Kaso and state BJP president Tapir Gao also spoke.
Earlier,the chief minister handed out tokens of appreciation to several motor transport workers with one among them being Binyim Taba, who is considered to be the first female tempo driver of Arunachal. (CMO)