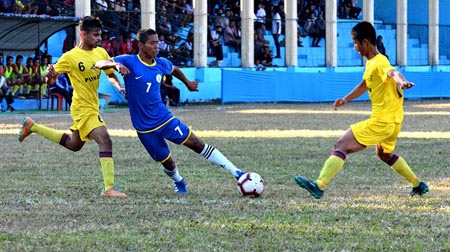 NAHARLAGUN, Dec 4: Arunachal drubbed Punjab 5-0 to register their second win in the Sub-Junior National Football Championship at RG Stadium here on Tuesday.
Kenjey Lepcha opened the scoring just before the end of the first half with a brilliantly free kick.
Swarneem Gurung doubled the lead in the 66th minute, which was further extended by Ujjal Rai in 74th minute (3-0). Heri Rambo scored the fourth goal in the 80th minute.
Punjab conceded an own goal in the 68th minute.
Maharashtra grounded Tamil Nadu 10-0 in the second match.
Arunachal had earlier beaten Maharashtra 1-0 in the opening match on 2 December.