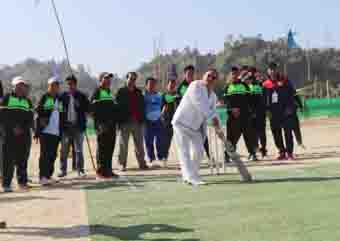 Staff Reporter
JULLY, Dec 13: The first Arunachal Pradesh T20 Cricket Premier League was inaugurated here by Sagalee MLA and former chief minister Nabam Tuki on Thursday.
Speaking on the occasion, Tuki, who is also the president of the Arunachal Cricket Association (ACA), urged the youths to channel their energy into providing positive output for the society and the state. He said this would be possible by through discipline, hard work and patience in sports.
Tuki lauded the Itanagar Cricket Association (ICA) for organizing the event for the first time on a standard format. He also dwelt on how the ACA got affiliated to the BCCI.
He informed that land for construction of a cricket stadium has been earmarked in Papum Pare district, and that the ACA is moving to get the proposal approved for work to start.
Tuki also expressed happiness with the ever improving performance of the Arunachal team in tournaments like Ranjhi Trophy.
ICA president CA Taba Techi said the aim of organising the tournament is to unearth new talents of the state and create a larger platform for them to excel.
The winner team will be awarded a cash prize of Rs 3 lakhs along with the trophy and a certificate, while the runner-up team will be given Rs 1 lakh, a trophy and a certificate. The man of the series will get a scooter, and the men of the matches will get android mobile handsets.
Thirteen teams representing 13 different districts are participating in the tournament.
The first match was played between the Capital Cobras and the Siang Invaders. The Capital Cobras won the toss and elected to field first. They were given a target of 169 runs by the Invaders, with Rudhra Pradhan scoring 55 runs in just 21 balls for the Siang Invaders.
Chasing the target, the Capital Cobras were all out for 135.
Pradhan was adjudged man of the match.
On Friday, in the morning, the Pare Tigers will lock horns with the Yomgo Yorkers, and the Tirap Challengers will take on the Tawangchu Stallions in the afternoon.
The matches are being played at the general ground here. The final will be played on 24 December.