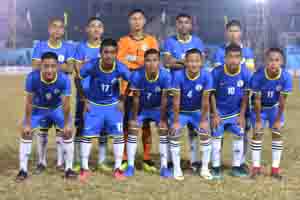 Staff Reporter
NAHARLAGUN, Dec 13: Arunachal Pradesh came from a goal behind to defeat Mizoram 2-1 in extra time and set up a historic final clash with Odisha in the Hero Sub-Junior National Football Championship (NFC).
The high voltage match at RG Stadium here on Thursday went to extra-time after both the teams were locked at 1-1 in regulation time.
Mizoram was leading 1-0 against Arunachal at halftime.
The hosts after the break came out all guns blazing and were denied of the equalizer until six minutes to go.
Captain Yura Tarung netted the equalizer in the 84th minute to force extra-time.
Ujjal Rai scored the stunning winner, generating wild celebrations among the supporters.
Earlier, Odisha booked their place in the final with a 6-2 victory over Jharkhand.
The final will be played on 15 December.