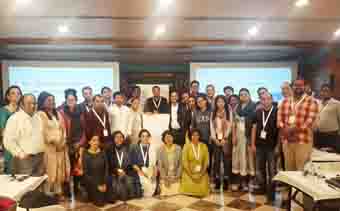 Staff Reporter
KOLKATA, Dec 13: The Google News Initiative (GNI) began its third train-the-trainer (ToT) boot camp for India here in West Bengal on 13 December with over 30 participants from various parts of the country.
The four-day training by GNI India Training Network and with its partners will focus on fact checking, online verification, and digital hygiene for journalists, using the curriculum built by experts from First Draft, Storyful, AltNews, BoomLive and DataLeads.
On completion of the training, the participants – all with journalistic background – will join the network of 200 network-certified trainers, who will go on to train more journalists in their own newsroom or at workshops in their cities and pass on the skills to 8000 journalists over the next year.
On the first day of the training, the participants were briefed on the programme and on how Google tools can be used to detect mis/disinformation.
Resource persons Syed Nazakat from DataLeads, Pratik Sinha from AltNews and Rohna Tarrant from Storyful briefed on ‘journalism and the change of information landscape in India’, on “fake” news in India, and on types of mis/disinformation, besides giving hands-on training to verify photographs circulating on the internet.
While they said that the term “fake” news is being used for easy understanding by the common populace, they emphasized on using appropriate language to avoid miscommunication.
During the hands-on training session, Sinha said Google and its components can be used as a tool to assist journalists in verifying facts but a person has to apply his or her journalistic instincts to get accurate results and reach out to the source for verification.
A video conference was also held with Google’s Asia Pacific region news lab lead Irene Jay Liu, who explained the necessity of such training programmes for journalists, who act as reliable sources for the masses.
On questions regarding similar training for rural journalists in the Northeast, she said the rural population is also gaining increased access to the internet and would be looked into.
The training, which ends on 16 December, will also include sessions on verification of videos, source checking, geolocation, finding time and location, reaching out to sources, etc.
While the year-end training of GNI Indian Training Network saw a large participation of West Bengal journalists and academicians, the Northeast states (apart from Assam) of Nagaland, Sikkim and Arunachal Pradesh had one representative each.