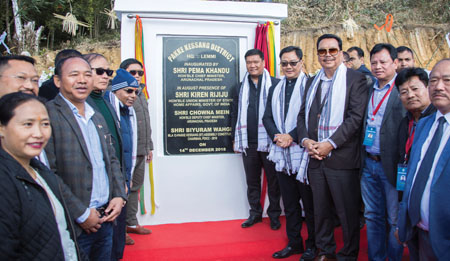 CM urges people of Pakke-Kessang to stress on promoting tourism

LEMMI, Dec 14: The total number of districts in Arunachal Pradesh has swelled to 25 with the inauguration of Pakke-Kessang district by Chief Minister Pema Khandu in a function here on Friday.
MoS for Home Kiren Rijiju, Deputy CM Chowna Mein, Home Minister Kumar Waii, Environment & Forests Minister Nabam Rebia, former chief minister Nabam Tuki and others were also present on the occasion.
In his address, the chief minister promised to sanction funds for establishing official residences, offices and other infrastructure, so that the district may start functioning at the earliest.
He assured to incorporate funds in the coming budget session for overall infrastructure development in the district, and appealed to the locals to cooperate with the government officials who would be posted here.
“All the three newly created districts – Shi Yomi, Lepa Rada and Pakke-Kessang – have huge potential in tourism, and the state government will give its full contribution to exploit it.
“Besides support from the government, the newly created districts also require active involvement of the locals, especially business entrepreneurs, to invest in their districts for development of the tourism sector,” Pema said.
He congratulated the people of Pakke-Kessang, and recalled the contributions of all former local public leaders, the Nyishi Elite Society, and other Nyishi organizations.
The CM also remembered former minister late Dera Natung, “who had also dreamt for this day.”
He commended the locals and the Nyishi organizations for their cooperation in expediting the creation of the new district, and thanked all the 60 MLAs for their wholehearted support during the last assembly session for the creation of the new district.
Chief Secretary Satya Gopal handed over the district flag to Pakke-Kessang DC Tammuna Messar, and IGP Sunil Garg handed over the ceremonial flag to the new SP, Jimmy Chiram.
Rijiju, Mein, Waii and local MLA Biyuram Wahge also spoke. (CMO)