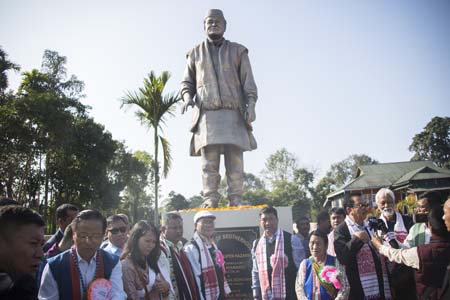 BOLUNG, Dec 15: Chief Minister Pema Khandu on Saturday unveiled the statue of legendary singer and composer late Bhupen Hazarika here in Lower Dibang Valley district.
The 10-foot-high bronze statue will also be known as the ‘Statue of Brotherhood’.
Addressing the participants at the unveiling ceremony, the chief minister said, “Late Dr Hazarika had touched the hearts of many Arunachalees through his songs and films dedicated to the state.
“A legendary icon, late Dr Hazarika had travelled the length and breath of Arunachal Pradesh and cemented the age-old bond between the people of Arunachal and Assam through his songs, films and literary works,” Pema said.
Describing late Hazarika as a true patriot, he said, “Late Hazarika wrote many songs about the sacrifices made by the Indian Army during the 1962 war.”
He informed that a proposal to make Assamese a third language would be taken up in the state cabinet “in order to strengthen the bond between Assam and Arunachal.
“The language will not be made compulsory but the students will be free to choose among the third languages,” Pema said.
The CM commended the Arunachal Pradesh Literary Society (APLS) for its effort in having the statue erected. “It is the symbol of unity between Assam and Arunachal,” he said.
DCM Chowna Mein, Assam Power Minister Tapan Kr Gogoi, Asom Sahitya Sabha president Parmananda Rajbangshi, and APLS president YD Thongchi also spoke.
Among others, Dambuk MLA Gum Tayeng and Roing MLA Mutchu Mithi, family members of late Bhupen Hazarika, and members of the AAPSU and the AASU attended the ceremony. (CMO)