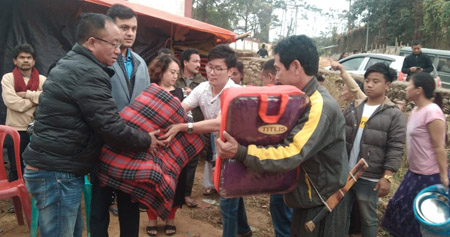 ITANAGAR, Dec 17: Itanagar MLA Techi Kaso and Capital Complex Deputy Commissioner Prince Dhawan on Monday distributed blankets, utensils, food items, etc, among the families affected by the fire accident that had occurred at ESS Sector here on Sunday.
A rented house, belonging to one Koj Shanti, where seven families resided as tenants, was gutted in the fire, along with a shop and a gumti. A car and a motorcycle were also damaged.
DDMO Moromi Dodum Sonam informed that no casualty was reported and the cause of fire is yet to be ascertained.
Kaso advised the residents to remain alert and be careful “as fire accidents are being reported frequently these days.”
The DC also urged the residents to be alert as burning of firewood is common during winter. He also informed them about the toll-free number, 1077, of the emergency operating centre. (DIPRO)