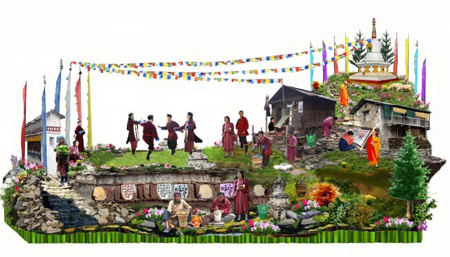 ITANAGAR, Jan 3: Arunachal Pradesh has been selected for participation in the Republic Day Tableaux Parade 2019 at Rajpath, New Delhi, on the theme ‘Peace within’.
The state’s tableau has been designed by award-winning art expert Dhruba Bhattacharjee and his team according to the defence ministry’s instruction that all the tableaux should be on Mahatma Gandhi or related to him.
Bhattacharjee and his team members Hage Habung (exhibition assistant), Roto Tadi (exhibition artist) and Sangey Tsewang (artist) along with artistes from West Kameng district are leaving for New Delhi shortly for the final preparations.
Altogether 32 tableaux were earlier cleared for selection. Out of these, only 14 tableaux, representing as many states, including Sikkim and Arunachal, have been selected by the expert committee.
Tableaux from Arunachal have been selected 13 times over the years, and in 2017 the state won the first position among all the states. The theme then was ‘Yak dance of the Monpas’.
Information & Public Relations (IPR) Minister Bamang Felix, IPR Secretary Sonam Chombay, IPR Special Secretary Himanshu Gupta and IPR Director Obang Tayeng have congratulated the members of the art & exhibition cell of the department, and conveyed their best wishes for the R-Day in New Delhi. (DIPR)