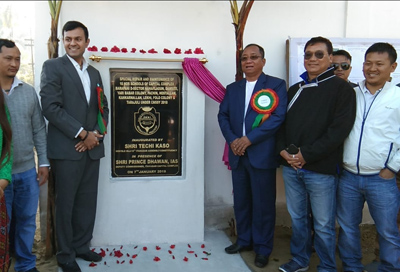 LEKHI, Jan 7: Local MLA Techi Kaso along with Capital Complex Deputy Commissioner Prince Dhawan on Monday inaugurated the infrastructure work for schools under the Chief Minister’s Samast Shiksha Yojana (CMSSY) undertaken by the Naharlagun PWD division.
During the inaugural function at the government middle school here on Monday, the MLA said several initiatives have been taken to improve the educational scenario in the capital complex, including a proposal for a new G+3 building for the middle school here, and proposals to upgrade other schools.
Saying the state government is committed to improve the education system, Kaso sought cooperation from every individual, especially teachers and students, “whose contribution is prime to improve the education system.”
The DC informed that repair and maintenance work under the CMSSY is underway in all schools of the capital complex.
“Under the CMSSY, training for over 400 teachers was conducted in collaboration with the Azim Premji Foundation, Avanti Fellows, the ALS IAS, and various schools of the capital complex,” he said.
Dhawan also informed that furniture, whiteboards, water filters, etc, were earlier distributed to all the schools, and assured that development of playground, construction of toilets and boundary walls, etc, as sought through a memorandum, would also be taken care of.
The DC also informed that the repair work on the road from the Hotel Arun Subansiri to Mowb II and Gandhi Market would start shortly.
Later, Kaso and Dhawan inaugurated the link road from Barapani Colony to Down Colony on the Yupia road. The improvement work on the link road was carried out under the initiative of the administration.
The link road will now connect Barapani Colony to Down Colony, and reduce traffic on NH 415.
The MLA and the DC interacted with the residents of the colony, who also submitted a memorandum. (DIPRO)