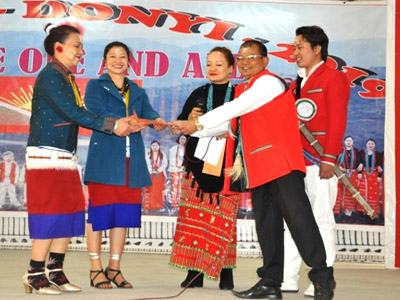 TALIHA, Jan 7: Apart from infrastructure, cultural development of different communities is part and parcel of the government’s initiatives to develop the nation, Minister of State for Home Kiren Rijiju said on Sunday while participating in the Si-Donyi festival celebration here in Upper Subansiri district.
During his speech, Rijiju enumerated the various schemes and projects implemented during his tenure, especially in Taliha constituency, and added that more infrastructure development works, including roads, would pick up pace in the district in the coming days.
In Daporijo, Rajiv Gandhi University Vice Chancellor Saket Kushwaha, who attended the central Si-Donyi festival celebration there, spoke on the need to preserve the state’s rich cultural heritage and age-old traditions.
In Nacho, public leader Lardik Kare urged the indigenous people to participate in the festival, irrespective of the religions they profess. He also discouraged the involvement of “money culture” in festivals, saying accepting money from guests during festivals should be avoided.
Kare also appealed to the people to avoid taking money from the MLA candidates in the forthcoming general election.
Si-Donyi was also celebrated with enthusiasm at other places, including Dumporijo, and Mechuka in Shi Yomi district.
In West Siang district, the Tagin community residing in the district celebrated Si-Donyi festival at Gumin Kiin in Aalo on 6 January.
Greeting the people on the occasion, Dr Nyage Geyi said festivals are rare occasions to showcase the rich tribal culture and tradition, and to encourage the young generation to promote their age-old culture.
West Siang DC Swetika Sachan, KKKK Enterprises chairman Ijum Karbak and Miss Arunachal 2017-18 Osin Mosu also spoke. (With DIPRO input)