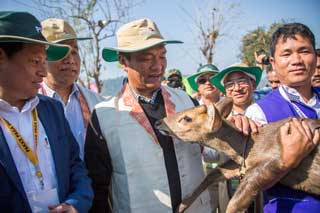 SEIJOSA, Jan 20: The state government declared the Pakke Paga Hornbill Festival (PPHF) – the state’s only conservation festival, which is held here in Pakke-Kessang district – as a state festival on Sunday.
Chief Minister Pema Khandu made the announcement while attending the closing ceremony of the 4th edition of the PPHF here on Sunday.
The CM promised to provide fund for constructing a “permanent infrastructure” on the festival ground. He also promised to create 113 posts in the tiger protection force to boost conservation efforts, and informed that 170 posts of forest guards and foresters have been sanctioned, “for which recruitment will be held shortly.”
Saying that the PPHF has helped in creating awareness on nature conservation, Pema lauded the initiative of the local Nyishi community “for bringing out such a beautiful festival.”
Stressing the importance of the unique festival, he urged the forest department to fund the PPHF annually, “in entirety,” from next year onwards, as the festival is connected to the department, and said the state government would provide all support from its end.
Pema also informed that the state government allocated Rs 75 lakhs through different departments for this year’s PPHF.
He said all the major festivals of Arunachal, such as Tawang Festival, Adventure@Mechuka, Orange Festival of Music and Adventure, Ziro Festival of Music, and Basar Confluence, were started under his leadership.
“Arunachal has earned high reputation in the country in tourism promotion,” Pema said, and enumerated the awards the state won last year, including the ‘most promising new destination’ award and the ‘exotic destination of the year’ award, at different national tourism events.
“Arunachal bagged the ‘best emerging destination’ award in the current year also,” the CM said.
Stating that the state has immense tourism potential, the CM urged local businessmen and entrepreneurs to invest heavily in the sector. He cited the example of Tawang and how the district has become prosperous with the local entrepreneurs investing heavily in tourism.
On the occasion, Pema released a barking deer which had been rescued and raised by a local family and was named Charmak, which means ‘deer with white spots’.
Also present on the occasion were MLAs Biyuram Wahge and Tapuk Taku, NTCA IG S H Negi and Global Tiger Forum Chief Rajesh Gopal, state BJP vice president Tame Phassang, and other dignitaries. (CMO)