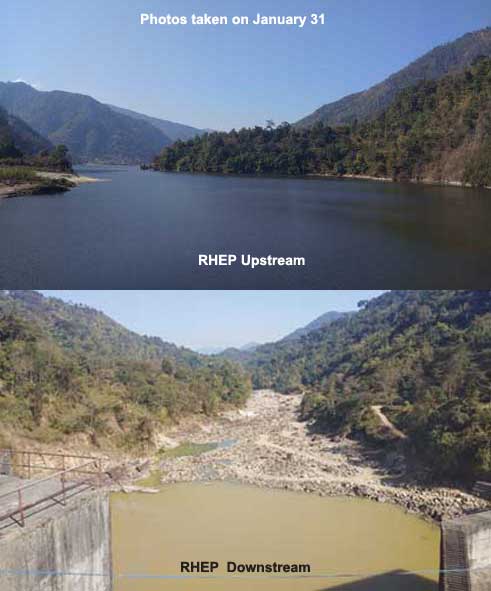 ITANAGAR, Jan 31: The North Eastern Electric Power Corporation Limited (NEEPCO) is set to shut down its Ranganadi (Panyor) Hydro Electric Plant (RHEP) in Yazali under Lower Subansiri from 2 February, but is yet to find a place to dump the silt.

The shutdown will last till 30 April.
Though the NEEPCO has said that it is ‘mandatory maintenance,’ insiders say the shutdown has been forced due to a leakage in one of the tunnels.
Speaking to this daily, Head of the RHEP, PC Barman said that other repairs at the plant will be done as planned.
“When the dumping ground is finalized, we will start the de-silting,” he said, adding that a wall will be built near the dumping site to stop any spillage.
Burman further said that there were no reasons for downstream people in Arunachal or Assam to panic since the “deposited silt will not be unsettled even if the reservoir of the plant is dewatered”.
A committee formed by the Papum Pare district administration which includes two members from the Lichi-Cher Ranganadi Project Affected Area Management Committee (LCRPAAMC) had visited the probable silt dumping locations in Chun village.
Bamang Tare, one of the members of the committee said that the owner of the area of one of the two dumping sites, downstream of the plant, refused to give the go-ahead sign.
The other identified site is in the upstream of the reservoir, deemed too close to the reservoir.
Allaying fear of the downstream, the project head said that winter, which is lean season for the plant, is the best possible time to shut down the plant as there will be no loss of power or large scale damage downstream.
He said that “since the water will be released 15 cumec per second, there will be no impact downstream.”
Burman further said that if de-silting is done then the capacity of the reservoir will increase.
According to an earlier NEEPCO circular, during the shutdown time, 1 cumec of water, in addition to the normal river inflow will be released, after which the normal river flow will continue during the entire shutdown period.
He further said the reservoir will be opened for nine days during the shutdown.
NEEPCO was supposed to start the shutdown on 1 February but it has been delayed by one day to enable people to secure their animals and sand and boulder mines.
Papum Pare Deputy Commissioner Dr Joram Beda said that after a meeting with the downstream affected and the NEEPCO, a joint committee headed by APCS officer Khoda Rakhi, was constituted with members drawn from the district administration and the downstream organisation.
The committee is supposed to finalise the dumping site on 3 February.
Dr Beda said water released from the dam has to be slow and gradual so that there is no drastic increase in the river’s level. He further said that during the meeting it was decided that RHEP will take all steps to ensure that silt does not travel downstream and that it is removed from the dam mechanically.
Earlier, two downstream organisations-the LCRPAAMC and the All Kimin Youth Welfare Association (AKYWA) had said that they would not allow the shutdown unless NEEPCO made its standard operating procedure in regards to silt dump public.
Following the representations from downstream, the district administration had called a meeting for finalization of dumping site, among other issues.
Gida Kakum, president of the AKYWA said that the NEEPCO will have to ensure the safety of the downstream villages.
The current shutdown is being done after the last one in 2006.
According to the NEEPCO circular, the shutdown is to facilitate “repairing works at various locations of the project, such as the power house, surge shaft gates, tunnel, intake, dam gates, etc for which dewatering of the reservoir and the tunnel is essential.”
During the shutdown, the river inflow of the Ranganadi shall have to be diverted from entering into the tunnel and the same shall be released downstream by opening of the radial gates of the Ranganadi dam, the circular reads.
In the circular, the corporation had said that it shall “not take any responsibility for any loss/damage to life and property etc in case of any accident owing to violation of the notice,” prompting reactions from the two downstream organizations.
The NEEPCO in its circular had also asked the villagers residing in and around the reservoir area as well as on the bank of Panyor on the downstream of diversion dam and Pare, downstream of Powerhouse, not to go near the reservoir or on the banks of the rivers.

Tayeng hands over paragliders to 7 pilots

Online ‘Toycathon 2021’ gets underway at NIT