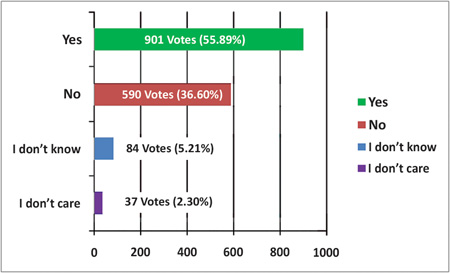 1. When so many corrupted officials and leaders are spared and can live with dignity in this country, then why cannot the authorities ignore such unintentional mistakes?
2. It’s an unfortunate incident that happened on Republic Day, but suspending the police personnel in-charge was not a justified action by the state administration. In the videos that were circulated, it could be clearly seen that the governor and the police personnel pulled the rope with full force while trying to unfurl the flag, so we can’t put all the blame on the person who was given the responsibility of readying the flag for Republic Day. Suspension order should be revoked immediately.
3. Don’t think it was a purposeful mistake. The job this man does may be feeding a lot of people at his home. Should have been forgiven with a warning, especially because it was Republic Day, which reminds us that we are one nation especially and that we are not oppressors of the people. I suggest let it be forgiven.

4. Respecting the national flag and national anthem is a constitutional provision and it needs to be upheld at all times. In this very case, the police personnel were the ones who were responsible for the same. It was their lack of duty as well as disrespectful gesture towards a constitutional provision. If they themselves will not adhere to these provisions and who will. The state will run into chaos.
5. They should have formed a fact finding committee first before taking a randomly pick and choose decision.
6. It was accidental not intentionally done. Proper verification is needed before taking action. Many others who are responsible should also be suspended for dereliction of duty and inquired into for major punishment.
7. It depends on one’s personnel view whether he is patriot or not. My view is that true nationalist is in heart and soul. It cannot be imposed, which is prevailing nowadays.
8. First of all, there was no overreaction. Reaction or action was necessary, but targeting constable level personnel shows that our law net is not capable to catch the big fishes. Punishment should be initiated from top to bottom.
9. It’s his (police official’s) duty to properly check the flag much before it was unfurled. Whatever he may say in his defence, but he has made a mistake and therefore he must be punished.
10. Mistakes are bound to happen. One needs to have a forgiving nature about petty (unintentional) things in life. I am being reminded of the favourite words of APPSC- “Human error” and yes as the saying goes, “To err is human, and to forgive, divine”, I think it was an over-reaction.
11. Yes. Instead of suspending corrupt officials who are involved in more heinous crimes and politics, suspending the lowest position official just for a flag incident is of course overreaction.
12. Suspension of police personnel does not solve any of the country’s problems. Mistakes happen with every human being. Such strict action should have been taken against those who hamper the country’s or state’s developmental activities.
13. There could have been a more sensitive and responsible approach to the incident, which is evidently not a planned or intended mishap. All the department could’ve and should’ve done was take it as a learning experience and be better prepared for future such events.
14. Suspension was not the solution. It was an incident and can happen with anyone in near future.
15. There is no question of overreacting. National flag is the pride of the nation and falling down of the tricolour while hoisting by the Constitutional head of the state is a big blow on itself. Therefore, suspending the police personnel in charge is very obvious step.
16. He was made scapegoat. With such harsh pull, any rope will snap and any pole head will break. Need to say sorry to police personnel.
17. Yes it is over active action from those concerned. An incident like this is purely accidental. So, a drastic action like suspension is unacceptable, immature act.
18. Discipline is the ultimate force in police department. No chance of carelessness.
19. It is the duty of the seniors to update themselves 2-3 days before an important event. Seniors are equally responsible.
20. State administration & police is a joke itself.
21. Someone has to be held responsible. But can’t say suspension of the particular was good.
22. It’s the fault of the media. It’s demeaning to report such incident. If such incidents are reported then what administration has to do? No option left but to suspend the people involved to uphold the sanctity of the national flag. Such an incident is unfortunate and no one is to be blamed, but media has put such news in the front page, leaving no option for the administration. So media should be responsible and just not put news, which has no use for the society as whole.

Covid care centres should be free of charge.