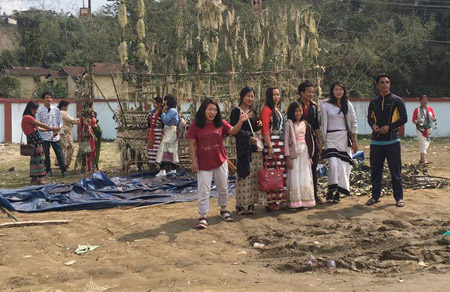 ITANAGAR, Feb 26: The 39th Nyokum Yullo celebration was held at the Nyokum Lapang ground here on 26 February.
Though the festivity saw low participation of revellers, the people here made efforts to keep up the tradition and took part in the cultural events.
The festival’s organising chairman Tassar Taro informed that the celebration is held from 17 to 26 February, and that the Nyokum rituals have been completed as per custom.
He expressed happiness at the effort of the people who came to participate in the festivity despite the current situation in the state capital.
Earlier in the morning, women performed the Rikam Pada dance. Several food stalls and exhibition stalls were also set up at the ground.
Taro informed that a “cultural night” is set to take place in the evening.