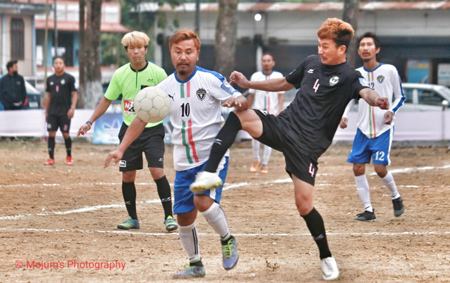 MODEL VILLAGE, Mar 5: Two-time winner Commando FC pounded Black Warriors FC 5-1 in the 20th match of the Model Super League (MSL) here in Papum Pare district on Tuesday.
Black Warriors took the lead 33 minutes into the match with a goal from Paney Kuma.
The team took full control of the second half and scored four goals in quick succession by Taba Rampum (2), Gyamar Kuku and Taba Taram.
Rampum was awarded the man of the match title.
The 21st match of the league, which was played between newcomer Queens Gate Public School (QGPS) and Thug Life Bulls (TLB) FC, ended in a 3-3 draw.
Black Warriors FC will meet Athletico De Model FC on Saturday, while the second match of the day will be played between Khampu FC and Queens Gate FC.
In Monday’s matches, defending champion Petwa United FC were held to a 3-3 draw by three-time finalist Athletico de Model FC.
Puri Donyi was declared man of the match.
In another match of the day, Khampu FC beat Real Model FC 4-0. Taba Sel, who scored all the goals, was chosen as the man of the match.