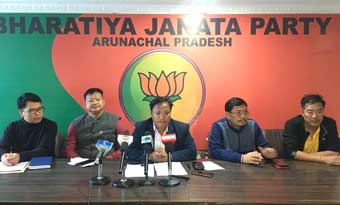 Staff Reporter
ITANAGAR, Mar 7: The state Bharatiya Janata Party (BJP) lashed out at the opposition parties for meeting the governor on Wednesday evening and seeking the resignation of the chief minister.
Addressing reporters here at the BJP office on Thursday, BJP chief spokesperson Dominic Tadar said, “demanding the chief minister’s resignation on the basis of law and order situation was ironical when the situation was created by them.”
He said, “there is no question of resignation of the chief minister, deputy chief minister or the minister of state for Home Affairs on the grounds created by vested interest political parties,” and blamed the Indian National Congress (INC), the Peoples’ Party of Arunachal (PPA), National Peoples’ Party (NPP) and the Janta Dal (Secular) for “all that happened in the state capital on 22, 23 and 24 February.”
Expressing remorse on the death of the three youths during the anti-PRC agitation between 22 to 24 February, Tadar said “the INC took advantage of the genuine protest by the students on 22 February and incited them to go on a massive rampage.”
“The recent unrest, death of youths, destruction of public and private property, daylight robbery and arson were done by the Congress and its goons,” he said.
Claiming that the PRC issue is the handiwork of the Congress, Tadar cited the videos of Arunachal Pradesh Congress Committee (APCC) president Takam Sanjoy circulating in social media, and said the Congress chief “advocates for granting PRC to non-APSTs and later also denies it.”
“His (Sanjoy’s) JHPC recommendation was rejected by our government on the reasons that there was no provision for protection of tribal rights, which was violation of the BEFR of 1873. There was also no clear cut demarcation of land and lot of discrepancies in the report,” Tadar added.
He also cited the gazette notification released by the state government that the PRC matter would never be taken up again.
Tadar said: “The PRC issue was started by the Congress and the BJP closed the chapter.”
Regarding the opposition parties’ decision to move ahead with a movement outside the Raj Bhawan, he reiterated that the PRC issue was stopped forever and condemned the “extra issue being orchestrated by the opposition political parties.”
“No governor on earth will accept politically motivated demands,” he added.
On whether there was any miscommunication with Home Minister Kumar Waii as he had given a statement disclaiming issuing any firing orders, BJP general secretary Lelung Lingfa said that neither the chief minister, nor any other minister has the authority to give firing orders.
While he said that the power lies with the magistrate as per the situation, he could not ascertain whether the magistrates gave the orders or not.
BJP vice president Tame Phassang also took a jibe at the opposition parties and said the INC, JDS, PPA and NPP are “alarmed” because of the ensuing elections.
“What they could not achieve in decades was accomplished by the BJP chief minister within two years of coming into power in the state, and that has sent alarm bells ringing for them,” he said.
The BJP also highlighted that the opposition parties did not attend the all-party meeting called by the BJP to defuse the situation to bring in peace.
“This clearly implies that they are involved in the mission,” Phassang added.