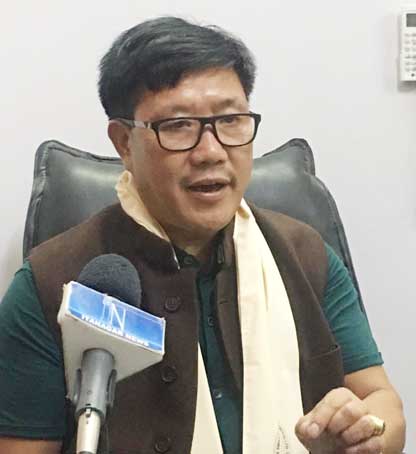 Staff Reporter
ITANAGAR, Mar 7: On receiving reports that political parties here in the state could hold a protest outside the Raj Bhawan, Home Minister Kumar Waii has requested all citizens, including political parties, student and other organisations, to maintain peace and to refrain from resorting to any sort of violence.
On Wednesday, the Indian National Congress, the Janta Dal (Secular), the Peoples’ Party of Arunachal and the National Peoples’ Party had met Governor BD Mishra seeking the resignation of Chief Minister Pema Khandu.
They had said that if the CM does not resign or is not sacked by the governor by 8 March, the political parties would launch a democratic movement outside the Raj Bhawan.
“I have received news that some political parties went to the governor seeking the chief minister’s resignation, and that they would protest outside the Raj Bhawan if their demands are not fulfilled,” he told reporters here on late Thursday evening.
Citing the ongoing CBSE examination, Waii said that any sort of movement should be democratic and peaceful in nature so as to not disrupt the education of the state’s children.
“Our education system should not be affected and board results should come out good. As parents and elders, we should consider how such protests could affect the education of children,” he said.
He also highlighted that election dates are going to be announced in a few days, for which, he said, a peaceful environment was required.
Regarding demands of the victim families to hand over the police personnel involved in the shootings, Waii said that the customary practices cannot be allowed in a democratic rule.
He said that “many old and cruel practises such as child or forced marriages and revenge killings have now been forsaken by the society, and are banned.”
“While we understand the sentiments of the people, we do not support revenge system. There will be an inquiry and if there has been any incident of criminal nature, the government will punish the guilty,” he added.
Regarding concerns that the opposition was defending him, Waii said, “There is no question of the opposition defending me”.
He also condemned the protests against the transfer of the capital SP to Changlang, and said citizens should refrain from protesting against transfers and postings.
Earlier, the home minister held a meeting with the DGP and the chief secretary, wherein they discussed on ways to build public confidence. He also directed the DGP to keep him updated on the law and order situation of the state.
Waii, who is also the minister of UD, Town Planning, etc, informed that he had a video conference with Prime Minister Narendra Modi regarding the smart city mission, and assured him that the people of Arunachal are with him in making Pasighat and Itanagar smart cities, with all modern amenities.
“We need to make the smart cities beautiful and develop infrastructure instead of destroying them,” he said and requested all not to repeat the destruction, adding: “The damage done to the property here was of not anyone else, but of our people.”