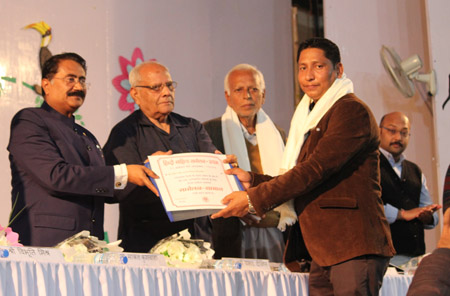 RONO HILLS, Mar 12: Rajiv Gandhi University (RGU) Vice Chancellor (VC) Prof. Saket Kushwaha said that the way, in which majority of the people of Arunachal Pradesh speak Hindi, has character and charm.
“Arunachalee Hindi has its own character with a very beautiful way of expression,” said the VC at the valedictory function of the 71stConference and Symposium of Hindi Sahitya Sammelan here in Papum Pare district on Tuesday.
He advised the organization for documentation and preservation of the papers that were presented during the symposium and maintaining a vibrant website so that the activities of the conference are easily accessible to the scholars.
“Translation works must be carried out to popularize the local writings,” he said, adding that a memorandum of understanding can also be signed with the RGU for exchange of research works as well as taking up research projects.
During the Sammelan, the ‘Sahityavaschaspati Samman’ was awarded to Sitaram Tiwari, Dr. Bhupendra Rai Choudhary and Dr. Raman Sandilya.
The ‘Sahitya Sammelan Samman’ awards were given to Prof. Harish Kumar Sharma, Prof. Oken Lego, Dr. Madhusudan Sharma, Jumsi Siram, Dr. Joram Ania Tana, Dr. Joram Yalam Nabam, Dr. Jamuna Bini Tadar, Tumbom Riba Lily, Dr. Taro Sindik, Boke Bagra and Dr. Akhilesh Shankhdhar for their contributions to the development of Hindi.
There was a special session held on the second day of the conference, which was attended by West Bengal Governor Pt. Keshrinath Tripathi.
Pt. Tripathi said that Hindi has the capability of uniting the entire country.
“However, to achieve the goal, we must bring the language into practice,” he said.
“At the same time, we should take care that the decorum and dignity of the particular language is preserved and respected”, he said.
Pt. Tripathi also recited his poems during the ‘Kavi Sammelan.’