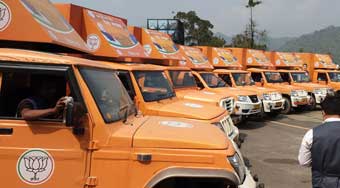 Staff Reporter
ITANAGAR, Mar 14: Deputy Chief Minister Chowna Mein and state BJP president Tapir Gao on Thursday flagged off 50 mobile video vans for election campaigns that will reach out to voters throughout the 60 assembly constituencies in the state.
Addressing reporters during the flag-off ceremony near the state guest house at Niti Vihar, Mein said that the mobile video vans will go to all 60 assembly constituencies of the state to spread the message of Prime Minister Narendra Modi and Chief Minister Pema Khandu, and highlight various schemes, overall development and agenda of the party and government.
Further, Gao informed that the party manifesto is in its last stage and would be released shortly.
Senior BJP MLAs and leaders were also present during the event.