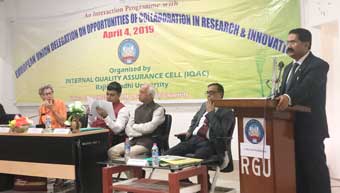 RONO HILLS, Mar 4: A delegation from the European Union (EU) on Thursday visited Rajiv Gandhi University (RGU) here to explore opportunities of collaboration in areas of research and innovation.
During an interaction programme with the delegation, organized by the university’s Internal Quality Assurance Cell (IQAC), RGU Vice Chancellor Prof Saket Kushwaha said, “RGU has been striving to serve its mandate of providing access to higher education as well as contributing to research in the border state of Arunachal Pradesh.”
Expressing his gratitude to the EU delegation for its initiative to reach out to RGU, Prof Kushwaha said the university and its entire fraternity were “enthused at the possibilities of affiliation and collaboration.”
He congratulated the university’s departments for working together to formalize the presentations that were made by the university.
Kick-starting the series of presentations, IQAC Director Prof Amitav Mitra outlined the university’s history and spoke about its mandate, which he said was “not only to educate and train manpower for the development of Arunachal Pradesh but also to pay special attention to the improvement of the social and economic conditions and welfare of the people of the state, their intellectual, academic and cultural development.”
Terming the visit of the EU delegation very significant, he expressed hope “for a new era of fruitful academic cooperation.”
Marking the start of a series of presentations on ‘EU MS/AC-India research-funding programme’ by the visiting team, the delegation’s head, Tania Friedrichs, said research and innovation cooperation are an integral part of the EU’s relations with India, and urged the university to engage more with the instruments of research that the EU offers.
Describing the visit as “the beginning of a long-term engagement,” she said the EU has an implementing arrangement with India that includes scholar mobility programmes, individual fellowships, and bilateral and multilateral collaborations.
Other presenters of the delegation, from Belgium, France, Italy, Denmark and Norway, spoke about their respective country’s perspective on the thrust areas of possible funding and collaborations.
Concurring with RGU’s mandate and its respect for biological and cultural diversity, besides the need for sustainable development and the idea that change elements must benefit all sections of society, the members of the delegation expressed their support towards “activating instruments to internationalize future research and innovation initiatives.”
The members also emphasized on the need for a mix of stakeholders in the research initiatives, and suggested having a multidisciplinary approach in conceptualizing the proposals, where the focus could be on new technologies and also on how they impact society.
Earlier, RGU Life Sciences Dean Prof RK Singh made a presentation on the unique biodiversity of Arunachal. He also highlighted the university’s potential as a major research partner that the EU could collaborate with.
Prof Jumyir Basar from the Arunachal Institute of Tribal Studies in her presentation spoke about how RGU has been upholding its mandate to engage with the communities of the state and the issues confronting them.
She also enumerated the research areas that the EU and RGU could collaborate on.
The EU delegation comprised Tania Friederichs (head of delegation), Dr Vivek Dham (member of delegation), Inger Midtkandal (Royal Norwegian Embassy), Dr Srinivas Kaveri (Director, CNRS, Paris), Alain Ghislain Baetens (Embassy of Belgium), Dr Massimo Spandoni (Embassy of Italy) and Dr Jakob Williams Oerberg (Royal Danish Embassy).

Delegation visits NERIST
Later, the delegates also visited the NERIST and interacted with the faculty members there to apprise them of the various opportunities and avenues for collaborative research with scientists and universities of different European countries.
Welcoming the delegation, NERIST Director Prof HS Yadav provided a brief overview of the institute, and the institute’s Dean (Admin) Prof KN Dewangan highlighted the ongoing research activities being undertaken by the faculty members of different departments.
A few areas were identified for collaborative research, which includes cancer research, arsenic removal using fungi, impact of climate change on water resources, and green vehicle.