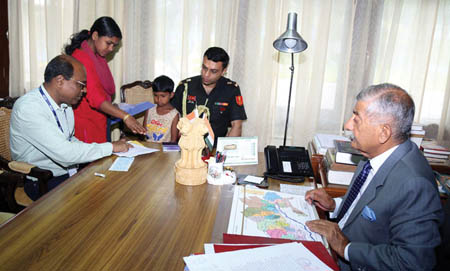 ITANAGAR, Apr 16: Governor BD Mishra on Tuesday admitted a six-year-old girl in the nursery section of the government primary school in B Sector here, securing free education, uniform, books and midday meals for her.
The child is one of four siblings of a very poor widow. When the woman would go out to work, she would leave the girl, Manisha, at home to take care of her four-and-a-half-year-old younger brother.
On being informed that the girl’s elder brother, aged eight years, also did not go to school, the governor admitted all three siblings in the same school on Tuesday.
He also gave a cheque for Rs 10,000 from his personal account, and, at his request, the State Bank of India opened a fixed deposit account in the girl child’s name. The proceeds of the account will be available when she attains the age of 18 years.
The governor, an ardent supporter of the concept of ‘Education to all children of Bharat Mata’, appealed to the people, particularly the public leaders, senior bureaucrats and financially well-off persons, to support the schooling of poor children of Arunachal. (Raj Bhavan)