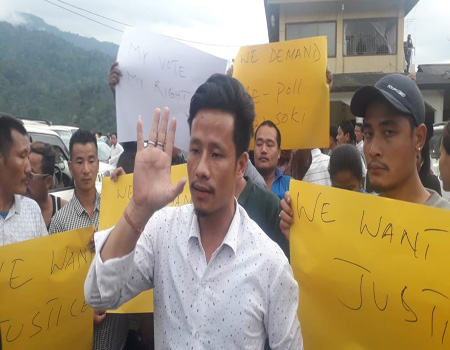 DAPORIJO, Apr 18: Expressing strong resentment over “infringement of adult franchise” at the Soki polling station under the Daporijo assembly constituency, members of the Daporijo unit of the Janata Dal United (JD-U) on Thursday organized a rally near the deputy commissioner’s office here in Upper Subansiri district, demanding fresh polls.
Seventeen members from the party’s Daporijo unit also submitted a representation to the returning officer, alleging infringement of adult franchise at the Soki polling station on 11 April during the simultaneous assembly and Lok Sabha elections.
Seeking fresh polls at the polling station, the JD(U) claimed that BJP workers did not allow 17 voters from the JD(U) to cast their votes on election day. The voters were allegedly threatened and warned not to lodge a complaint about it to the election authorities.
The JD(U) also said the party has “made a declaration” in the office of the judicial and executive magistrate here regarding the incident.