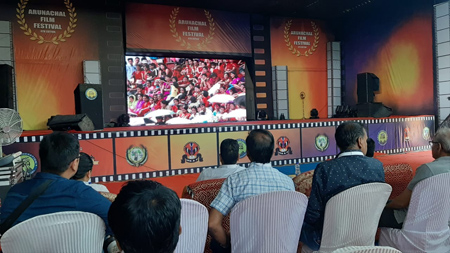 Staff Reporter
ITANAGAR, Apr 20: The 6th edition of the Arunachal Film Festival got underway at the Dree ground here on Saturday.
Organized by the Film Federation of Arunachal (FFA) in collaboration with the information & public relations (IPR) department, the two-day festival will showcase the works of local as well as national filmmakers, alongside a workshop on ‘Cinematography and visual art of cinema’ by Partho Borgohain.
Besides the screening of the award-winning documentary Daughter of Nepal by Surbhi Dewan and feature film Dobara Alvida by Shashank S Singh, a panel discussion was held on ‘Film tourism and film policy – strategizing future’.
During the discussion, senior filmmaker from the state, DK Thungon, called on young filmmakers to be faithful and consistent towards their craft. He emphasized on creating world-class cinema with the stories of the people here, instead of constantly striving to make commercially acceptable mainstream movies.
Academician and filmmaker Moji Riba underscored the relevance of government partnership in assisting the filmmakers of the state.
While he noted that the only major financial partner for the filmmakers of the state is the government, Riba said filmmakers cannot constantly be grant seekers.
“We need to convince the government to make us partners for the benefit of all parties involved.
The government shouldn’t pity us; they should partner with us,” he added.
Mumbai filmmaker Shashank S Singh advised the filmmakers of the state to visit film festivals held across the country to gather more knowledge and create avenues.
Regarding the language barriers, he said while Hindi has a large reach in India, regional cinema has its own appeal in the country as well as outside it.
“Don’t let any barrier come in front of you. The uniqueness of a film is its story. Choose your story and shoot,” he said.
Tourism Information Officer Takom Kena said a film policy for the state is in the process of being drafted. For this, he said, ideas of the tourism and the IPR departments need to be incorporated.
Regarding film tourism, Kena said the tourism department’s job is to attract filmmakers from outside. “However, with the lack of logistics, the cost is nearly 40 percent higher for a shoot in the state than it is in some of the nearby countries,” he said.
Kena requested the FFA and the IPR department to come up with ideas keeping in mind the requirements and interests of local as well as mainstream filmmakers.
An interactive session was also held between the panellists and the audience, during which queries were addressed.
Later, nine movies were screened for the short-film competition. These included Dusk by Ligang Sallu, The Dilemma by Tai Josam, Voiceless by Xonie Lingdom, Lost in Traffic by Subu Gambo, Vanishing Roots by Tage Apa, Abo Tani by Kombong Darang, Mute by Mankap Nokwoham, NH 415 by Namabm Sonii, and Arunachal Election Time by Nyishi Boy Raw.
Oha…e, a feature film by Subu Gambo, was also showcased. The film presented a comical take on the misadventures of an Apatani youth in the ’70s.
In the evening session, veteran filmmaker of the state, Taro Chatung, encouraged the young filmmakers of the state to give their best to their art. Tanom Jerang’s documentary Blowin’ in the wind, and feature films Jeevan ek Sanghasrsh by Topan Rimo and NEFA 1953 by Tapen Natam were showcased.
The workshop is scheduled to be held on Sunday. It will be followed by screening of a series of documentaries and feature films.