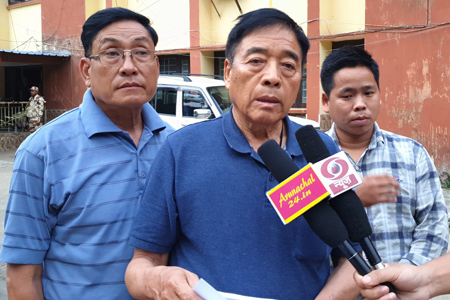 ITANAGAR, Apr 20: Alleging that polling was not conducted “democratically and properly” in Singging village under the Tuting-Yingkiong assembly constituency in Upper Siang district, Janata Dal (Secular) candidate and former chief minister Gegong Apang on Saturday demanded re-polling in Singging.
On Saturday, Apang met Chief Electoral Officer (CEO) Kaling Tayeng and Additional CEO Kanki Darang here and, along with party president Rokom Apang and others, submitted a letter in this regard.
“I am to inform you that polling at Singging village under Tuting-Yingkiong assembly constituency was not conducted democratically and properly. The polling was conducted under great threat by BJP workers. I request you to take immediate action and give immediate order for re-polling of assembly and parliamentary elections at Singging village for safe, free and fair election,” the letter read.
Later, addressing reporters at the Nirvachan Bhavan premises here, the former CM said he had made a similar request to the returning officer (RO) of Upper Siang, who then ordered the assistant RO of Tuting-Yingkiong to investigate the matter.
Apang, however, said the investigation was not satisfactory.
“With no alternative, I have come here to the CEO’s office. I met the CEO and additional CEO. After this, the only alternative left is to approach the court,” he told reporters soon after meeting the poll panel officials.
Meanwhile, the ACEO informed, “Apang has submitted a representation seeking re-poll in Singging. We have forwarded his complaint to the Yingkiong DEO. Necessary action can be initiated after we receive a report from the DEO.”