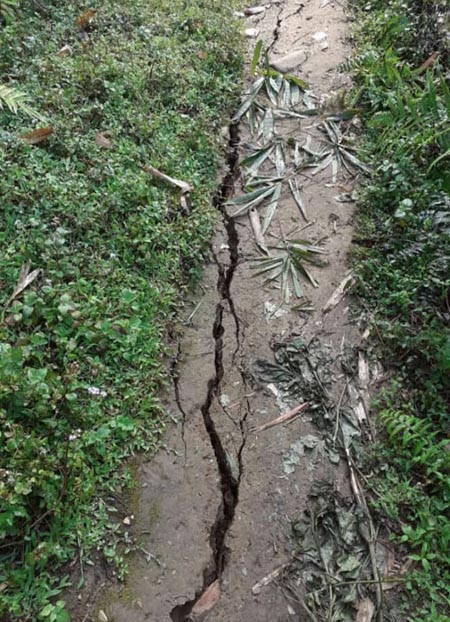 ITANAGAR, Apr 24: Earthquake hit the state at 1.45 AM on Wednesday leaving trail of destruction in Shi Yomi district. However, the details are still sketchy.
According to official accounts, road from Kamba to Darak, Darak to Poyom, Darak to Bogo and Darak to Potom were blocked due to landslides triggered by the earthquake.
Heavy blockade was also reported between Tato and Mechuka road after the earthquake triggered landslide occurred at Row village under Tato circle of Siang district.
At Kaying EAC headquarter under Siang district, heavy cracks were found in many places, with reports of damage to walls and local fencing.
The blockade from Kamba to Darak was immediately cleared by the concerned PMGSY contractors by 11.30 AM.
A wall of a semi-RCC kitchen collapsed, while two units of a semi-RCC type-ll quarter belonging to the medical department under the Community Health Centre, Darak and a three-room semi-RCC dwelling house developed several cracks.
The latter was rendered unfit for dwelling.
A portion of the RCC boundary wall of the CO’s office in Darak also collapsed.
No loss of life due to the earthquake has been reported so far.
According to department of Disaster management, the earthquake occurred at 01:45:48 1ST and tremors were felt across the state from Tawang district to Tirap district.
The epicenter is reported to be about 10 kilometers from Darak circle Headquarter in West Siang. The depth of the earthquake was 10 kilometers.
Detailed information on loss and damages are still awaited as the epicenter is located in the deep and remote locations, said Secretary disaster management Bidol Tayeng.
“Earthquake tremors are frequently felt in the State being located in Seismic Zone-V. However, the 24th April earthquake differs from the previous earthquakes for reason that it was so far, the highest magnitude earthquake with epicenter within Arunachal Pradesh”.
Meanwhile, there have been contradicting reports of its magnitude, with the state’s department of disaster management measuring it at 5.8, the Indian Meteorological Centre (IMD) at 5.9, and the United States Geological Survey pegging it at 6.1.