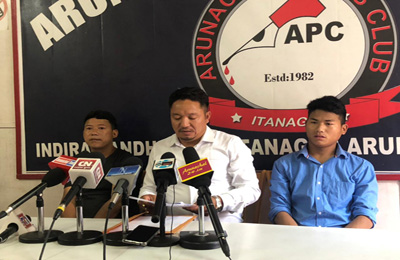 Staff Reporter
ITANAGAR, Apr 25: The BJP’s MLA candidate for the Bameng assembly constituency in East Kameng district, Guruk Pordung, has demanded that the Election Commission of India (ECI) conduct fresh poll at the Rawa polling station, claiming that the booth had been captured during the 11 April election.
In a press conference at Arunachal Press Club here on Thursday, Pordung claimed that the National People’s Party’s candidate Kumar Waii and his supporters had captured the Rawa polling booth and did not allow BJP supporters to cast their votes.
“Rawa is a Puroik village. Waii has been subjugating the Puroik community for long. So it is my humble appeal to the ECI to give justice to the Puroik community and order fresh polling at the Rawa polling station,” Pordung said.
He also denied Waii’s recent allegation of having been assaulted by Pordung’s supporters, and termed the allegation baseless.
“In the incident where Waii’s vehicle was damaged, I was there controlling the youths. Some youths were from Tajo and some were from Bameng. In fact, I was the one who saved him (Waii),” Pordung claimed.
The BJP’s polling agents have also submitted a complaint to the chief election commissioner regarding booth capturing, allegedly by Waii and his supporters, and claimed that although the government has freed the Puroik community from bonded labour, “Waii himself is a slave owner who has been subjugating Rawa village for two decades.”
The complaint letter also claimed that on 10 April, Waii and his supporters broke into the house of former gram panchayat chairman of Rawa village, Maya Nyere, and robbed some five lakhs rupees. It said the BJP’s polling agents were later threatened with dire consequences if they came to the polling station, forcing them to “hide in the jungle for two days.”
“On 10 April, Waii along with his supporters came to Rawa, looking for me and my polling agent friend, Sama Bechang. We had to run for our lives, and spent nights in the jungle,” claimed Saju Jha, a BJP polling agent, during the press conference.
“We had reported the possibility of booth capturing to the presiding officer, and we did not sign on the polling document either. So the ECI should consider our case and order fresh poll at the Rawa polling station,” said Jha.