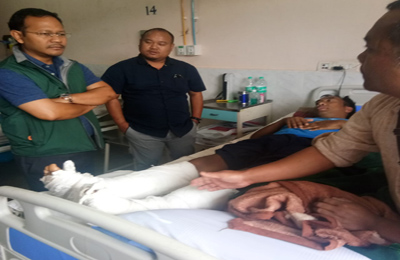 Staff Reporter
ITANAGAR, Apr 26: National People’s Party (NPP) worker Khamney Aboh, who had been grievously assaulted by suspected NSCN activists on the night of 30 March in Tirap district, is recuperating from his injuries at the North Eastern Indira Gandhi Regional Institute of Health & Medical Sciences (NEIGRIHMS) in Shillong, Meghalaya, informed Tirap district NPP president Noklam Bisai.
Aboh, along with Jaley Anna, had been picked up from Kheti village by suspected underground (UG) elements on that night and beaten up. While Anna succumbed to his injuries, Aboh received grievous injuries.
Meghalaya Home Minister James Sangma, accompanied by the NPP’s Arunachal Pradesh unit general secretary Wangngoi Hakhun, visited Aboh at the NEIGRIHMS on Thursday to enquire after his wellbeing.
Sangma contributed financial assistance to Aboh for his treatment, Bisai said.
Aboh has suffered compound fractures in his legs, besides injury to his kidney. His condition, however, is reported to be out of danger.
Sangma vehemently condemned the gruesome murder of Anna and the attack on NPP workers.
Commending the efforts of the NPP workers in Arunachal, the minister assured to initiate every possible effort to ensure their security.