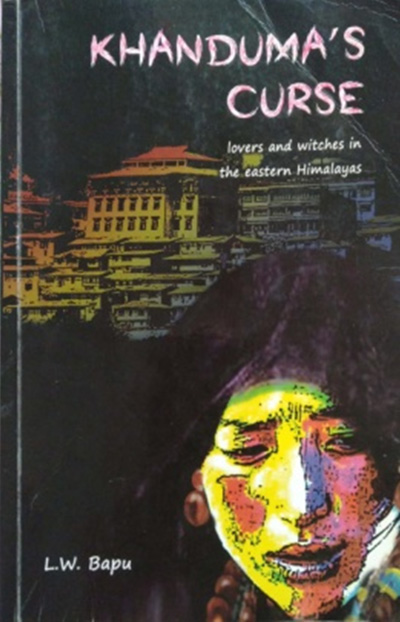 The Monpas of Arunachal Pradesh are a sternly religious and god-fearing people, and they have a range of myths and folklores in their annals. Besides stories of miracles by divine beings, stories of witches and demons have had their tales spread far and wide in their belief.
Khanduma’s Curse: Lover and Witches in the Eastern Himalaya, written by LW Bapu, is inspired by witchcraft, sorcery and malevolent sprits that are believed to actually exist. Khanduma is a witch who ensnares men and feasts on their flesh.
“Camouflaged as a beautiful woman by day and a witch by night, who preys on young and unsuspecting innocent men; extreme nymph-omaniac. The undesirable men are suffocated to death.” Khanduma fears none but women, especially pious ones.
The book is segregated into two parts, and assembled into 18 chapters bearing separate titles. Set in Tyanglha village in an unknown period of time, it tells the story of Anima and Passang. Anima, the mistress of the night, is a powerful Khanduma – evil but alluring. Bewitched by her unmatched sensuality and beauty, “men danced to her tune like poodles, giving in to her wishes and fancies. She was much loathed during the day, but much sought after dusk.”
Passang, a saintly woman, with the help of divine intervention, wrestles against the diabolic force of Anima to save her brother Tsetan. In this fight, good triumphs over evil. But Passang becomes a quarry of Anima’s necromancy.
The subplot revolves around the heart-rending love affair between Passang and Yontan, a doctor, who becomes a monk to guard the divinity of dharma against evil. The narration is a juxtaposition of the archaic and the contemporary worlds, and is very convincing.
The book celebrates the classic theme of evil against good. The charm of the book lies in its transgression of spiritualism and the forbidden subject of witchcraft and sorcery, which makes the narrative unique and intriguing.
The exploration of nature, the expressive language, and the fluent description of the culture of the Monpas in the work set Bapu beside YD Thongchi and Mamang Dai, the two literary giants of Arunachal. The lyrical expression of the love between Passang and Yontan would be soothing to the wounded hearts of lovers. This promising debut work of Bapu, with its refreshing content, has created a unique identity for Bapu in the literary world of Arunachal Pradesh.
The only disappointing part of the book is its shoddy editing. A little push in editing would have added gloss to the book. Yet, as a first-time novelist, the author has done a remarkable job. The enchanting tale transfixes the reader. This is the right book for those interested in the realm of the spirit and witches to get a thrill this summer vacation. (The contributor is from the Department of Education, Rajiv Gandhi University)