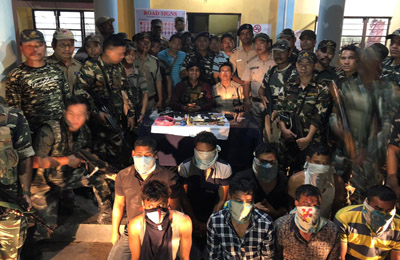 ROING, May 4: There was a major shootout near Roing in Lower Dibang Valley (LDV) district between the police and 13 robbers including some surrendered members of the NDFB.
The police have arrested eight robbers with arms, foiling their plan to rob banks here on Saturday.
As per reports, at around 6 pm on Saturday, a car with five people in it and three motorcycles with another five people on them ran through a police check point at Meka Tinali, despite being stopped by the police.
The car sped towards Shantipur and was followed by a police team, which apprehended all five persons in the car from near the Shantipur check gate. Items such as a gas cutter and other equipment used for committing bank and ATM theft were found in their possession and seized.
The three motorcycles fled towards Bomjir and were followed by a police team led by SP Sanjay Kumar Sain. They were intercepted near the bridge in Bomjir, and on being stopped the miscreants opened fire at the police.
Reportedly, DSP Tab Techi escaped a shot as the bullet missed him and passed through his car. The SP also escaped without injury as his PSO, who was wearing a bulletproof vest, intervened and intercepted the bullet in its path.
The police retaliated with fire, and were able to nab three miscreants.
Three Chinese-made pistols along with eight live rounds of ammunition and two spent cartridges were recovered from their possession.
Two of the miscreants managed to flee from the scene, taking cover of the night and the shootout. Reportedly, they jumped into the river to escape.
The police said they had received information from reliable sources that felonious elements had entered the Roing township area to commit robbery at banks in the town.
Working on this information, SP Sanjay Kumar Sain and his team had set up a check point at Meka Tinali to monitor the movement of vehicles to and from the township.
The SP lauded the efforts and quick action of his entire team, and congratulated them on the valour they showed during the operation.
He said the eight miscreants are currently being interrogated, and that it is likely that in the coming days more miscreants would be arrested and arms recovered.
The same police team had arrested NSCN (K) cadres in the past, earning a recommendation for gallantry.