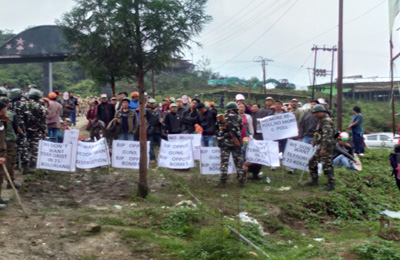 KOLORIANG, May 7: Supporters of the BJP candidate for the Koloriang assembly constituency in Kurung Kumey district on Tuesday staged a protest in front of the DC office here, demanding arrest
of the persons involved in vandalizing the SP’s office recently.
Holding placards, the protesters demanded immediate arrest of the people involved in vandalizing the SP’s office, as well as arrest of the person(s) involved in planting an explosive device at the helipad here.
They also shouted slogans opposing the demand of the NPP for re-polling at the Taba and Nampe polling stations.