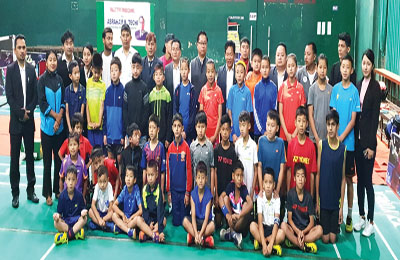 ITANAGAR, May 10: The first Sub-junior State Ranking Badminton Tournament started at the MLA Cottage badminton stadium here amid a huge gathering of sports lovers, in spite of the inclement weather.
More than 200 young badminton players from various districts, clubs and associations from across the state are participating in the tourney, vying for the prestigious title.
The tournament is being organized by the Arunachal State Badminton Association (ASBA). The three-day event will feature competitions in the doubles and singles categories for boys and girls in the U-9, U-11 and U-13 age groups.
Arunachal Olympic Association secretary-general Abraham K Techi declared the tournament open. In his address, he advised the young badminton enthusiasts to keep up the interest in sports along with their studies.
“Use your talent to bring national and international laurels to the state and the country as a whole,” said Techi.
He also advised the players to “set your target to represent India, and work hard to achieve your dreams.”
Informing that many youths from the state have done well in national level competitions, he said grooming at a tender age would help them grow in stature and expertise.
ASBA secretary Bamang Tago informed that organizing the tourney for the Under-9 age group is the first of its kind in the country.
“We are the first to organize a competition for them, so that young shuttlers can be groomed from a tender age,” Tago said.
He said the ASBA is aiming to create awareness among parents and instill a sense of competitiveness among the young badminton enthusiasts of the state.