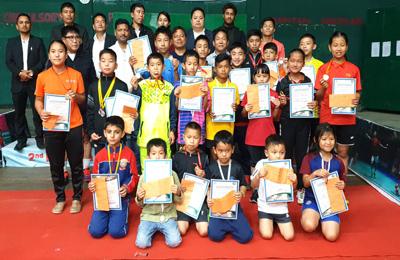 ITANAGAR, May 11: The pair of Geson Potom and Pakli Bagra won the boys’ U-13 doubles gold in the first Sub-Junior State Ranking Badminton Tournament, which concluded at the MLA Cottage badminton hall here on Saturday.
The pair of S Gongo and S Tamang won the second position, and the pairs of Nyete-Rohan and Chow Soijan Manlong-Nima Lama the third positions.
Pakli also won the boys’ U-13 singles’ gold, beating his doubles partner Geson. The bronze medals in this category went to Nabam Issac and Taku Manku.
In the girls’ U-13 singles, Jamba Waii won the gold. Beryl Saring won the second position and B Borgohain and Sonam Chotten the third positions.
Samuel Tamang won the boys’ U-11 singles’ gold. The second position was won by Gunveer Gongo, and the third position by Licha Gomsh and Taku Manku.
The gold medal in the girls’ U-11 singles was won by Adam Doyom, and the silver medal by Laa Nanu. Jessica Saring and Yami Riang shared the third positions.
In the boys’ U-9 category, Dindo Liggi won the gold medal and Promod Joshi the silver.
The bronze medal in this category was won by Licha Polu and Joram Tado.
MLA Tesam Pongte attended the tournament as chief guest. He expressed words of appreciation for the organizers for their effort and dedication, and advised the parents to support their children in their sports endeavours.
“Winning and losing are part of competitions, and it’s our duty to guide the kids to cope with losing and winning,” added Pongte.
In total, 144 players, both boys and girls, participated in the tournament, which was organized by the Arunachal State Badminton Association (ASBA).
MLAs Laisam Simai, Tesam Pongte and former home minister Kumar Waii attended the valedictory function and distributed the cash prizes, medals and certificates to the winners, runners-up and other position holders.
In their speech, the guests motivated the young players towards sports and highlighted the scopes in sports.
ASBA secretary Bamang Tago and joint secretary Penya Bagra were also present on the occasion and addressed the budding players.