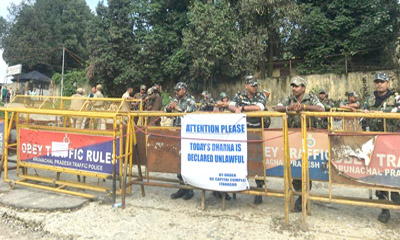 [ Nellie N Manpoong ]
ITANAGAR, May 14: With the last phase of elections scheduled for 19 May, a team of officials from the Election Commission of India (ECI) met the candidates and election agents of violence-hit Tali and Palin assembly constituencies (AC) of Kra Daadi district and Koloriang assembly constituency of Kurung Kumey district at the Nirvachan Bhavan here on Tuesday.
Tali, Palin and Koloriang ACs witnessed several instances of violence during the 13 April polls, including assault on polling officials, snapping of bridges, and planting of explosives at a helipad.
A gaon burah, Bengia Tamang, from Koloriang, who was a supporter of the NPP, was shot dead on 26 April, a day ahead of the fresh poll.
Speaking to reporters after meeting with the ECI officials, the National People’s Party’s Koloriang candidate, Pani Taram, said he stressed his demand for fresh polls at the Taba and Nampe polling stations as there had allegedly been severe incidents of violence there, in which a gaon burah had also lost his life.
He blamed the BJP for the violence and booth capturing at the polling stations, adding, “I am fighting for the rights of the deprived voters.”
Representing the BJP’s Lokam Tassar from Koloriang, election agent Ha Tatu expressed resentment over the demand for fresh polls in the area, citing lack of voters at this juncture.
“We are ready for fresh polls, but students who had come for the elections have all gone back and it will be difficult to ask them to come to vote, putting their careers at stake. Their (the opponent candidate’s) voters may also not come, but their voters are less in number than ours in the particular areas, which may cost us heavily. That’s their target,” Tatu said.
While the Congress’ Palin assembly constituency candidate, Takam Pario, informed that he placed a representation citing reasons for the ECI to hold fresh polls in Rakso, the Janata Dal (United)’s election agent, Dolang Tako, sought the disqualification of Pario.
On the claims of the ‘deprived’ voters of Rakso, Tako said there had been no instance of booth capturing there. He also claimed that “those who are making a ruckus about it are those who already have their names registered elsewhere, or have cast their votes through postal ballot.”
The BJP’s candidate, Balo Raja, on the other hand, informed that he placed his points and has left the decision over to the ECI.
Later, the JD (U)’s Tali assembly constituency candidate, Jikke Tako, said he informed the ECI officials of the problems that were encountered at the Gimba polling station, where fresh polls on 27 April could not be held as the bridge there had been taken apart.
“We hope for justice at the earliest,” he said.
The BJP’s Tali MLA candidate, Thaji Gichak Kiogi, said he “asked the ECI to find out the location of the polling team for the Jara polling station which is reportedly yet to reach district headquarters Koloriang.”
”Gimba has become more dangerous than Pakistan. The JD [U) is using AK-47, hand grenades… They have made bunkers at the entry points, and it has become a dangerous place. If fresh polls are held again, the lives of at least 100-200 people might be lost,” he said.
Meanwhile, neither the candidate nor the election agent of the INC’s Tali assembly constituency contestant was seen at the Nirvachan Bhavan.
Later, a group of people who claimed to have been deprived of their voting rights at the Rakso polling station also met with the ECI officials and placed their grievances.
On claims that they had registered their names elsewhere, some said even if that was the case, they had gone to cast their votes only in Rakso.
Representatives from Reibalo who had claimed to have been deprived of their voting rights were not available for a statement at the Nirvachan Bhavan.
While the ECI officials did not brief the media, they are expected to submit a report with their recommendations soon.
Meanwhile, a dharna was scheduled to be staged in front of the Nirvachan Bhavan by those alleging that they were deprived of their voting rights, prompting deployment of forces in front of the building.
Capital Complex Deputy Commissioner Himanshu Gupta had earlier issued an order terming the dharna illegal.
Capital SP Tumme Amo said the protestors had gathered at Akashdeep on Tuesday morning but they were not allowed near the CEO office.
“Later they yielded to our suggestion to withdraw and meet the ECI team,” he said.