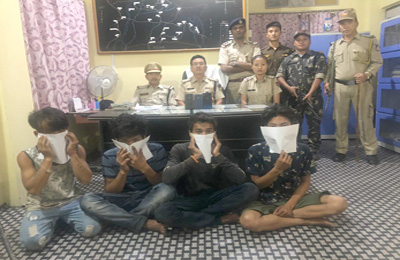 [ Karyir Riba ]
ROING, May 21: Some young miscreants who recently robbed cash and mobile phones from a goods truck in Lower Dibang Valley district have been arrested and taken into police custody.
An FIR was lodged at the police station here on 15 May, stating that a group of boys had stopped a goods truck at Meka Tinali around 6:40 pm and looted Rs 33,000 and three cell phones, police said.
According to the FIR, the miscreants also assaulted the driver of the truck and the passengers in the vehicle. One of the miscreants also attacked them with a stone, causing grievous bodily injuries.
After registering the case under Sections 394, 326 and 34 of the IPC, the police formed a team and swung into action.
The team arrested four persons from different locations within a week. The mobile phones that had been snatched were also recovered.
According to the police, all those who have been arrested are local youths from Meka village.
“Such incidents not only bring a bad name to the otherwise peaceful district but also may trigger interstate disputes. That is why we took the case very seriously,” said SP Sanjay Kr Sain.