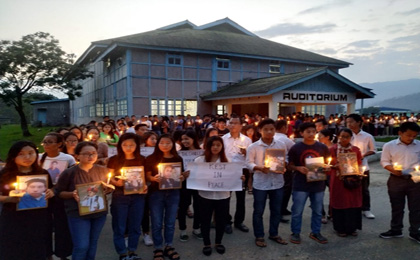 RONO HILLS, May 25: Students of Rajiv Gandhi University (RGU) here on Saturday staged a candlelight march to pay tribute to Khonsa MLA Tirong Aboh and 10 others who were killed by suspected militants in an ambush on 21 May.
The students, who were joined by the university’s faculty members and members of the All Arunachal Pradesh Students’ Union (AAPSU), walked together in silence to remember those who lost their lives in the dastardly attack.
Assistant professor of RGU’s AITS department, Dr Wanglit Mongchan, said the incident has sent shockwaves throughout the state.
“We are not sad about the incident but angry,” he said.
Condemning the incident, he said “the people in Tirap, Changlang and Longding (TCL) are threatened on a daily basis by the insurgents who do not wish to see development in their region.”
AAPSU IPR secretary Techi Mupu demanded that the state government hand over the case to the National Investigation Agency, and sought “permanent removal of the underground elements from the TCL region.”
AAPSU spokesman Nefa Wangsa remembered late Aboh as a “vocal, performing and outspoken leader,” and said the atrocities faced by the people of the TCL region needs a “permanent political solution.”
Lamenting the terror faced by the people of the TCL region, RGU Students’ Union (RGUSU) health secretary Khiapgi Agi appealed for support from the other parts of the state to demand justice for the departed victims.
Meanwhile, the RGUSU, which organised the march, expressed solidarity with the people of the TCL region.
The union said it will be submitting a memorandum to the governor on Monday regarding the issue.