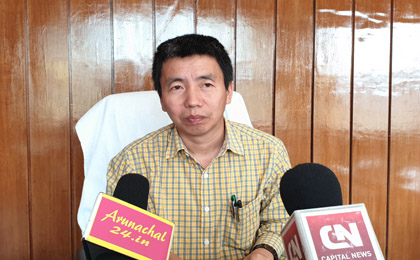 Staff Reporter
ITANAGAR, May 25: Chief Electoral Officer (CEO) Kaling Tayeng on Saturday thanked all the officials who had been engaged in conducting the simultaneous state and parliamentary elections, as well as the people of the state for their robust participation in the electoral process.
“I thank all the election officials of the state who had taken part, starting from DCs, SPs, down to the police and the polling personnel. Because of various factors, in many districts the process went on for two months. From the side of the election commission, we are grateful to all of them,” Tayeng told reporters here.
The state went to the polls on 11 April. Fresh polls had to be conducted at 18 polling stations in Palin, Nyapin, Tali and Koloriang assembly constituencies in Kra Daadi and Kurung Kumey districts on 27 April.
However, following violence in Nampe in Koloriang constituency (Kurung Kumey) and Gimba in Tali constituency (Kra Daadi), fresh polls had to be held again 21 May. The Election Commission of India (ECI) had to depute a four-member team following complaints over electoral malpractice.
Tali, Palin and Koloriang assembly constituencies witnessed violence, which led to the death of a gaon burah, assault on polling officials, snapping of bridges, and planting of explosives at the Koloriang helipad.
The CEO also expressed appreciation for the voters for taking part in the festival of democracy in large numbers.
“We are grateful to the voters who turned up in huge numbers to take part in the democratic process to elect to the Lok Sabha as well as the state legislative assembly,” he said.
The CEO said the electoral process in the state, which had started with the first phase on 11 April, was finally completed on 25 May after counting in the Dumporijo assembly constituency got over.
Due to various issues, and there being a single counting hall, it took almost two days to declare the result of the (Dumporijo) assembly constituency, Tayeng said.
The approved names of the candidates who have won, along with the names of their parties, have been submitted to the ECI, the CEO stated.
“Once their formal notification is brought, it will be notified in the state gazette and copies submitted to the office of governor and the chief secretary after the process of establishment of the next government takes place,” he said.