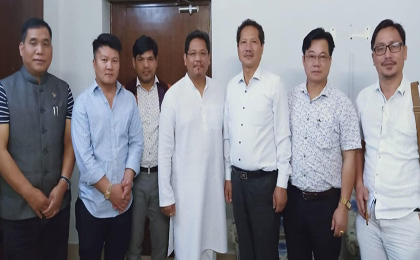 NEW DELHI, May 26: The National People’s Party (NPP) has elected Mutchu Mithi as the leader of the NPP legislature party in Arunachal Pradesh.
He was chosen as the leader by the newly-elected NPP MLAs of the state during a meeting here on Sunday, according a state NPP release.
The meeting was presided over by NPP president and Meghalaya Chief Minister Conrad K Sangma, and attended by the party’s Arunachal unit president Gicho Kabak, Meghalaya Home Minister James Sangma, and
other newly-elected party MLAs and senior leaders.
Meanwhile, Sangma assured the party’s leaders in Arunachal that he would visit the bereaved families of Tirong Aboh and others who were by killed by unidentified assailants in Tirap district two days prior to the declaration of the election results.
Sangma also said he would attend the oath-taking ceremony of Pema Khandu as the chief minister of Arunachal Pradesh, the release said.