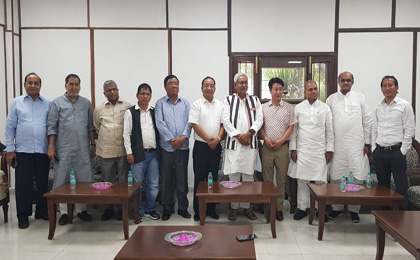 PATNA, May 26: The leaders of the Arunachal Pradesh unit of the Janata Dal (United) met the party’s national president and Bihar Chief Minister Nitesh Kumar at his official residence here in Bihar, and discussed various issues regarding the party’s future in Arunachal.
The party’s North East Executive Council chairman NSN Lotha informed that the team submitted the resolution adopted at the first state level JD (U) meeting which had been held in Itanagar on Saturday.
“We had a fruitful discussion and the relationship between the BJP and the JD (U) was also discussed. The opinion of the state unit was placed before the national president, besides discussions on future relationships between the two states,” Lotha said.
The Arunachal team included state JD (U) president Ruhi Tagung, JD (U) legislature party leader Techi Kaso, and deputy leader Hayeng Mangfi.
The party’s national general secretaries, RCP Singh and Afaque Ahmed Khan, along with senior leaders were also present.
After the BJP, the JD (U) is the second largest party in Arunachal, with seven members elected to the state assembly.