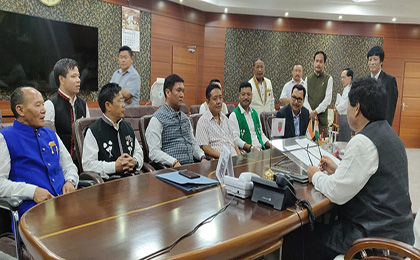 Staff Reporter
ITANAGAR, Jun 3: Mechuka MLA Passang Dorjee Sona is set to become the next speaker of the Arunachal legislative assembly.
He filed his nomination for the post of the legislative assembly speaker on Monday, in the presence of Chief Minister Pema Khandu, Deputy CM Chowna Mein and Home Minister Bamang Felix.
Changlang North MLA Tesam Pongte has filed his nomination for the post of the deputy speaker.
The nomination papers were received by Pro-tem Speaker Phosum Khimhun.
The speaker will be elected on Tuesday.
Sona’s name was doing the rounds to succeed TN Thongdok, just after the announcement of the names of Khandu’s council of ministers.
Sona is representing Mechuka assembly constituency for the third time. Tesam Pongte is a two-time BJP MLA from Changlang.
Earlier on Monday, the MLAs took the oath of affirmation in the legislative assembly.
The governor is slated to address the members on Tuesday.